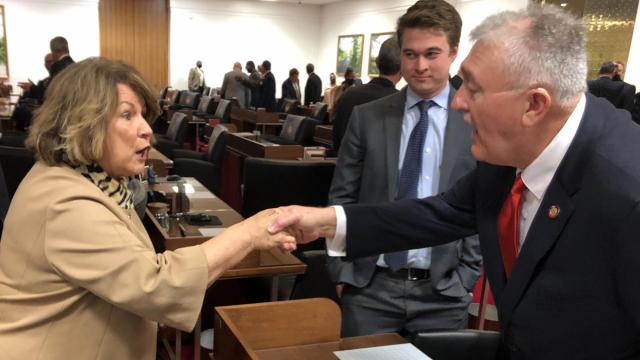 Raleigh, N.C. — Most House Democrats left the chamber floor Monday night as the Republican majority seated the body's newest member: A former Gaston County commissioner who attended the Jan. 6 U.S. Capitol riots and said at the time he was "at the entrance when they breached the door."

Rep. Donnie Loftis, R-Gaston, replaces the late Dana Bumgardner in the House, and he was sworn in officially Monday night. It was the only item of business on the House floor and, after confirming there wouldn't be any votes taken, Democrats walked out en masse.

The state party said in a statement after the brief ceremony that Loftis' seating shows the Republican Party is "trending towards extremism." Loftis declined to speak to reporters after the session wrapped, saying he'd rather spend time celebrating with his family, who attended.

"I am honored to be serving District 109," was his only other comment. 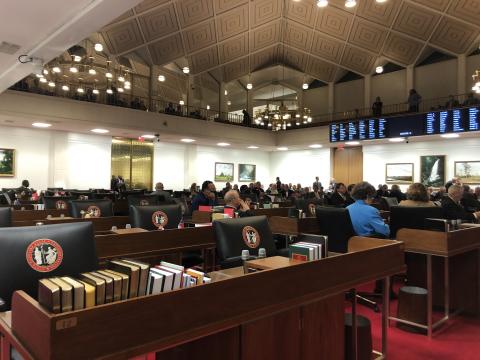 Loftis resigned the chairmanship of his local hospital board last year after a number of his COVID-19 social media posts were questioned, and it was a now-deleted Facebook post that drew the rebuke from Democrats Monday night.

Loftis wrote at the time of the Jan. 6 Capitol attack that he was close enough when rioters breached the Capitol to be "gassed three times" and that he felt a duty, as a veteran, to be there that day.

“My Oath of Enlistment has the phrase ‘both foreign and domestic,’" he said on Facebook at the time. “We didn’t think it would actually be domestic.”

But asked about that post last month, Loftis said his involvement was purely peaceful, that he was "surprised and disappointed" to see others storm the building, that he condemned it and that he would have no other comment.

House Speaker Tim Moore said after session Monday that he's known Loftis 20 years, that he's "a good man" and that, given FBI scrutiny of the Capitol attack, if Loftis had done anything illegal that day, "we'd have heard it by now."

"He's done so much for the community," said Moore, R-Cleveland. "Everything I've ever known about Donnie is about trying to give back and serve the community. I think we're fortunate he's here to serve."

In a statement shortly after the swearing in, the North Carolina Democratic Party tied Loftis to Moore, who may run next year for Congress, calling him "Tim Moore's Newest Extremist Member."

"Today marks a new low for General Assembly Republicans because, instead of condemning those actions and rejecting the rhetoric that incites violence, they are welcoming a Capitol insurrection participant with open arms," Democratic Party Chairwoman Bobbie Richardson, a former House member, said in the statement. "The Republican Party hand-picked Loftis to join their ranks, further demonstrating how trending towards extremism is the future of the North Carolina Republican Party.”

A half-dozen Democrats remained in their seats as Loftis was officially seated, though half of those did not applaud when Republicans gave Loftis an obligatory round of applause. They did applaud when the speaker recognized Loftis' family.