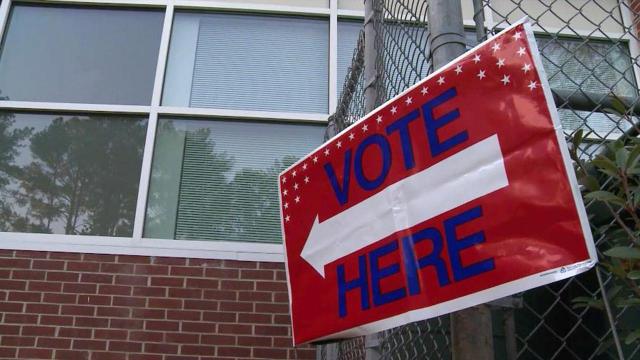 Raleigh, N.C. — The North Carolina Democratic Party appears to be using a "voter shaming" tactic to spur turnout in this year's election.

Voters in at least four counties – Wake, Durham, Orange and New Hanover – report receiving two different versions of letters from the party. One gives them a "report card" on their prior voting history – most are deemed "average" – while the other suggests the voter in question would be surveyed as to whether or not they cast a ballot in this year's general election.

Officials with the Democratic Party, including Keever, Chairman Randy Voller and executive director Casey Mann, did not immediately return phone calls, text messages and emails seeking comment. Keever later in the evening issued a written statement in response to questions about the fliers.

"This is a critical election and it's important to make sure our voters are getting out to vote," Keever wrote. "That includes stressing the importance of voting, talking about the voting process and what the stakes are for North Carolina,” said First Vice Chair Patsy Keever. “We will continue to look for every way possible to empower, educate, and encourage voters for the remainder of this election cycle."

The voter survey letter says "public records will tell the community at-large whether you vote or not. As a service, our organization monitors turnout in your community, and it would be an understatement to say that we are disappointed by the inconsistent voting of many of your neighbors." It goes on to say the recipient has been selected to participate in a survey about the voting experience and asks the voter take notes on the type of machines used.

"If you do not vote this year, we will be interested to hear why not," the letter says.

Known as "voter shaming" or "social pressure," the tactic first emerged widely in 2012 as a way to motivate voters to go to the polls. While political scientists say peer pressure can motivate people to perform socially desirable behaviors, such as voting, the letters often have the effect of annoying the recipients, many of whom see them as either insulting or an intimidation tactic.

"It definitely got my attention, but it confirmed for me why I chose to be registered as independent in North Carolina," said Virginia Fitt, a lawyer from Orange County who received both the report card and survey letter.

She called the turnout tactic "offensive."

The report card uses the voters' publicly available voting history to rate how regularly a person votes. Fitt got an "average" but says the flier is inaccurate. The report card dinged her for not voting in 2012. She did vote, but she was living in California at the time and so voted there. She moved back to North Carolina in 2013.

Voter shaming has been used by both liberal and conservative groups nationally. It caused a stir in North Carolina two years ago when two different groups used the tactic to motivate voters in Wake and Johnston counties. At the time, State Board of Elections officials said they got many complaints about the letters but added they were not illegal.

This year, elections officials did not have an immediate comment about the Democrats' letter.

Although this may be the first time a political party used the tactic in North Carolina, Democrats in Virginia mailed similar letters this year, and both parties employed the turnout ploy in 2012.