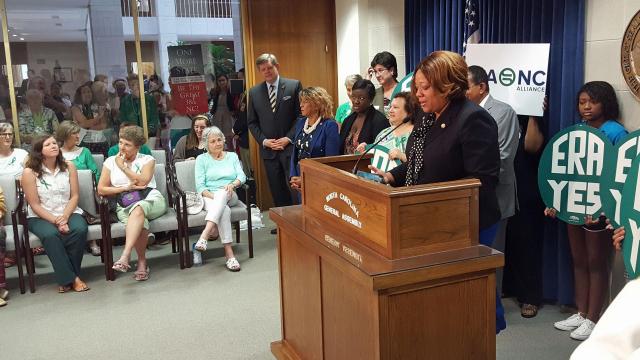 Raleigh, N.C. — In nearly two decades as a North Carolina resident, Charlotte Gallagher never had much occasion to enter the doors of the North Carolina State Legislative Building on Jones Street.

But on Wednesday morning, Gallagher traveled from Aberdeen to join several dozen other advocates to push lawmakers to ratify the Equal Rights Amendment, a 1972 measure that would add to the U.S. Constitution a ban on discrimination on the basis of sex. It could become the first amendment ratified since 1992, and only the second in the last 50 years.

Support for the long-dormant amendment lagged for more than four decades before Nevada took up the issue in March 2017, becoming the 36th state to ratify. Illinois followed suit last month, leaving the ERA one state short of the three-fourths threshold required to amend the Constitution.

Supporters here Wednesday want North Carolina to be number 38, an act Gallagher said will benefit not just her, but her six granddaughters.

"We need to do this," Gallagher said. "It's long overdue."

Section 1. Equality of rights under the law shall not be denied or abridged by the United States or by any State on account of sex.

Section 2. The Congress shall have the power to enforce, by appropriate legislation, the provisions of this article.

Section 3. This amendment shall take effect two years after the date of ratification.

But ratification will be a tall order in North Carolina, where Republican leaders have been reticent to move ERA bills filed by Democrats in the House and Senate from rules committees in both chambers, where legislation is often placed to die without a vote. Opponents say the amendment may not be necessary given all the existing legal protections against discrimination already on the books. They also point to a long-expired deadline with unclear implications – Congress originally required states to ratify the ERA by 1982.

That rationale in particular has reduced the issue's urgency as the legislative short session winds down.

"We think regardless of what action we take the amendment has died for lack of ratification, so we don't see any need to bring it up the last few days of session for something that we do not consider to be an actual question that's being asked of the General Assembly," Republican Rep. David Lewis, chairman of the House Rules Committee, said.

Yet supporters across the state and those gathered at the General Assembly this week said the amendment is worth fighting for – even if they have to unseat the majority party in the legislature to get it done.

"I have been working for the ERA since 1972," Virginia Adamson, with the ERA-NC Alliance, said before a Wednesday press conference. "There is no better time than now."

The Equal Rights Amendment would guarantee that "equality of rights under the law shall not be denied or abridged by the United States or by any State on account of sex."

Despite its recent momentum, efforts to ratify have stagnated in other states. In Virginia, an effort to approve the ERA failed outright in February. Just 13 states, most of them in the southeastern United States, have not yet passed the measure.

Supporters say that leaves North Carolina, which as of this week remained in legislative session with active ERA bills in committee, primed to cross the finish line. And bolstered by the rise of the "Me Too" movement, advocates say it's a good time to capitalize on a growing awareness and outcry against discrimination and harassment.

"If there was ever a time, it seems to me, it might be now, given everything that's been happening over the last few years," said Ted Shaw, a constitutional law professor and director of the Center for Civil Rights at the University of North Carolina at Chapel Hill School of Law. "The difficulty in North Carolina is the politics of this state right now and the politics of this legislature."

The offices of House Speaker Tim Moore and Senate leader Phil Berger did not respond to requests for comment this week. But aside from questions over the expiration date, other senior Republican lawmakers have questioned the amendment's necessity.

"I certainly believe that all people are equal. I think that it's important that we continue to promote equality and civil rights," Lewis, R-Harnett, said. "I don't know if creating additional reasons to sue is necessarily the way to do that."

Providing explicit protection in the U.S. Constitution isn't just symbolic, says Storm Onole, founder of RatifyERA.org. Her Statesville-based organization has been pressing for ratification of the ERA across the country, and recently set its sights specifically on North Carolina. Without a constitutional amendment, she said, there's no guarantee that generations of progress in law and the courts can't be undone.

And with a renewed women's rights movement building across the nation, she said women are tired of "having to fight for bits and pieces."

"Without having women included in the Constitution, it's that much easier for them to unmake those decisions and take back what we have earned," Onole said. "We can't be dependent on the mood of the country as to whether or not we should retain these privileges."

Speaking to the crowd of supporters Wednesday, Democratic state Sen. Erica Smith voiced similar concerns, describing the ERA as a legal foundation to fight for equal pay and against sexual harassment and discrimination. Even with existing protections, she noted that full-time working women – especially minorities and those with children – are still penalized financially and lag behind men in average wages.

"Enshrining equality for the sexes in the Constitution wouldn't immediately solve every issue, but it would provide an important bulwark against backward movement," Smith, D-Northampton said. "It is a signal to the courts and the country that gender equality is a mandate."

That rationale makes sense to Shaw, who said the Supreme Court's legal philosophy on the rights of women to be free from discrimination hasn't caught up with the jurisprudence on race.

"The idea itself ought to be unremarkable. But having said that, there's still a lot of discrimination in the workplace and the market and American life in general," Shaw said. "It's still something that it would be foolish to take for granted."

An ironclad and explicit protection would also speak to something deeper, he said.

"I also look at the Constitution as the embodiment of the statement of what our collective values are," Shaw said. "Even if it's just to say we as a country, the people of the United States, believe that discrimination on the basis of gender is wrong, and that the Constitution protects us, I think that's worthwhile."

Yet Shaw stresses that amending the Constitution isn't easy in the best of circumstances, and the ERA's expiration date does present some questions Congress would have to answer even if another state were to become the 38th to ratify.

For North Carolina, that's a big "if."

Democratic state Sen. Floyd McKissick, who sponsored this year's ERA bill and others in past legislative sessions, didn't sugarcoat the measure's chances in the waning days of this summer's short session. Lawmakers plan to adjourn Friday.

"I'm not delusional," McKissick, D-Durham, said. "It would take an act of God and divine intervention to see that occur."

He said the amendment will likely fair better in 2019, after Democrats have a chance to take back majorities or reduce the Republican supermajority in both chambers. He added, however, that the ERA should be an issue that transcends partisan politics.

The success of that effort could depend on challengers like Democrat Ginger Garner, who arrived at the legislative building Wednesday with her young son to support the ERA.

"If we're not advocating for the rights of human beings – and women's rights are human rights – then something is really askew in the nature of what we're pursuing," Garner said.

In November, she'll face Republican state Sen. Norm Sanderson in the race for District 2, an area encompassing the coastal counties of Carteret, Craven and Pamlico.

"The fact that he has been silent on many issues that work against his own constituency is really unacceptable," Garner said.

Sanderson said Wednesday that although he felt a lot of the rights the amendment would afford are already in law, he was neither for nor against it. But he said he'd like to read it more closely before he made up his mind.

"I would be open to doing that if it is in fact is something that needs to be done to ensure women equal rights in this country," Sanderson said.

Onole said the General Assembly should take advantage of the chance to move forward while they're still in session, a move that would "would have an incredible positive impact nationally." She's resolved to wait until 2019 if she has to. But she said it's embarrassing that women are still waiting – nearly 100 years after they fought and won the vote – for the same Constitutional rights men have.

"If it wasn't so painful for the majority of the population who are women, it would be laughable," Onole said. "Folks who say we don't need it, I think they don't have to live the lives we do."

Like Gallagher, the ERA-NC Alliance's Lori Bunton talked about her granddaughter Wednesday, shortly after a press conference where state lawmakers touted the protracted fight to enact the ERA. Bunton long ago promised her granddaughter the amendment would be ratified before her 18th birthday – she's now 15 years old.

When Bunton was about her age in the '70s, she remembers arguing for the ERA in a high school debate with a female classmate. Many of her arguments remain the same. But 40 years later, exactly who won the debate is a little less clear.