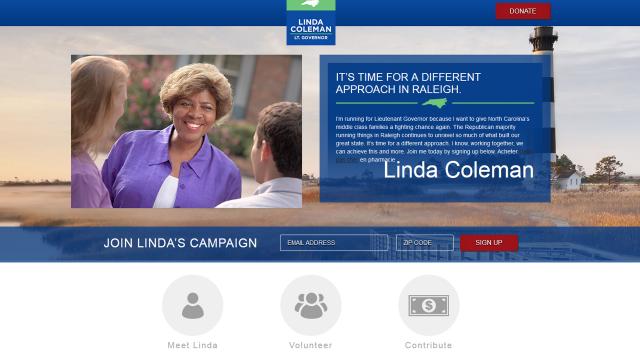 Raleigh, N.C. — Russians may be meddling in a North Carolina congressional election.

Linda Coleman, a Democratic candidate for the 2nd District seat held by Republican Congressman George Holding, said Friday that a Russian citizen purchased the defunct website from her 2016 campaign for lieutenant governor and duplicated some images and text to make it look legitimate going forward and create confusion among voters.

Coleman said she let the domain name LindaforNC.com lapse because she no longer needed it. She has created a LindaColemanforCongress.com site for her current campaign.

When staffers were googling her name recently, however, the LindaforNC site kept coming up in searches rather than her new site, she said. They did some research and found that domain name registrar GoDaddy had sold the old site to Ivan Gusev, a Moscow resident, in January.

The site has a photo of her overlaying an image from the Outer Banks, but some of the text includes a reference in French about buying prescription medicine online. A link to Coleman's bio and statement for her candidacy in the lieutenant governor's race still works, but links to contribute to or volunteer with her campaign have been disabled.

Coleman said she has no idea why she might have been targeted, but she urged public vigilance to defeat Russian interference in U.S. elections, similar to the email hacking and bogus social media accounts from the 2016 presidential campaign that U.S. investigators have linked to Russian operatives.

"This serves as further evidence that there are significant efforts by foreign entities to significantly influence our electoral processes and interfere with our democracy," Coleman said of the LindaforNC site. "This is a clear attempt to take away the trust we have in our political system."

She has notified the FBI and the state Attorney General's Office of the issue this week, and she said Congress needs to take action to insulate U.S. elections from outside interference.

"We obviously take the security of North Carolina elections very seriously. To that end, we are in frequent contact with staff at the Department of Homeland Security to strengthen our defenses against issues like those flagged by the Coleman campaign today. After receiving their call this morning, we immediately notified our partners at DHS by phone and email, and we will respond as appropriate to further developments," Gannon said in an email.