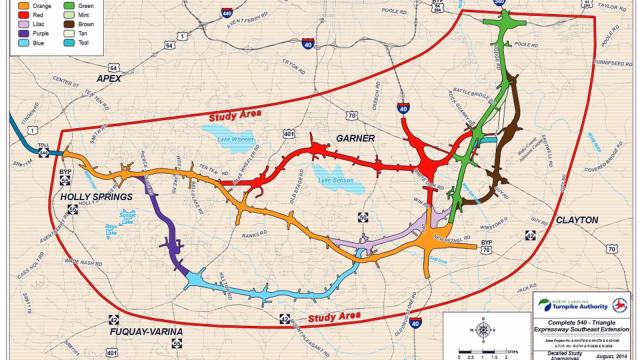 Raleigh, N.C. — The Federal Highway Administration has signed off on the draft environmental impact statement for the final segment of the N.C. Highway 540 toll road across southern and southeastern Wake County, state transportation officials said Tuesday.

The North Carolina Department of Transportation can now hold public hearings next month on the path of the future highway and use input from those meetings and the environmental impact statement to map out a final route.

Although the "red route" remains an option for now, state and local officials have vowed not to include it in the final plan. The controversial route would run N.C. 540 through the heart of Garner.

State lawmakers in 2011 passed legislation to prohibit DOT from even studying the "red route," but federal transportation officials said North Carolina couldn't receive any federal funding for the toll road if the route wasn't included in environmental studies. With the highway project stalled, lawmakers repealed the "red route" ban in 2013.

DOT has dubbed the toll road project, which will eventually run from N.C. Highway 55 Bypass in Apex to U.S. Highway 64/264 Bypass in Knightdale, Complete 540 because it would finish the loop highway around Wake County.

No timetable has been set for construction, but DOT hopes to select contractors for the project in 2018.