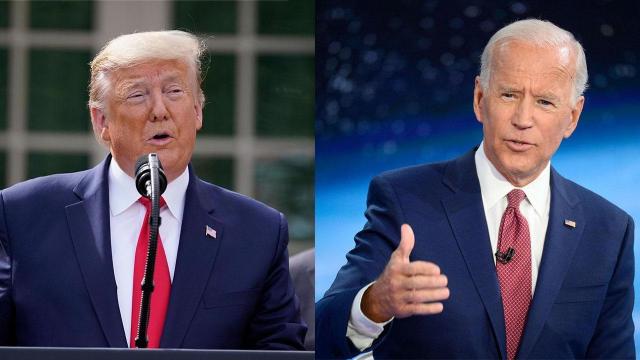 While Joe Biden leads President Trump by 10 points in our final national NBC News/Wall Street Journal poll of the 2020 presidential election, the contest is closer in the top battleground states.

In the 12-most competitive battlegrounds – Arizona, Florida, Georgia, Iowa, Maine, Michigan, Minnesota, Nevada, New Hampshire, North Carolina, Pennsylvania and Wisconsin – Biden is ahead of Trump by a combined 5 points, 51 percent to 46 percent, according to a final day of 800 interviews on Sunday from registered voters from these 12 states.

Biden’s lead in these states was 6 points in our Oct. 29-31 NBC News/WSJ poll, 51 percent to 46 percent, although that movement is within the margin of error. (This project was done just to give us another day of polling, since our national poll ended on Saturday.)

Important context here: Trump won these same states by a combined 2 points in 2016, 49 percent to 47 percent.

Democrat Joe Biden maintains his double-digit national lead over Republican President Donald Trump in the final national NBC News/Wall Street Journal poll before the 2020 presidential election, with six-in-10 voters saying the country is on the wrong track, and with a majority disapproving of the president’s handling of the coronavirus.

Biden is ahead of Trump nationally by 10 points among registered voters, 52 percent to 42 percent, in what’s been a remarkably stable race over the course of a tumultuous year in American politics.

The former Democratic vice president’s lead was 11 points in the NBC News/WSJ poll two weeks ago, 53 percent to 42 percent.

“This is the 11th survey we’ve done in 2020, and so little has changed,” said Democratic pollster Peter Hart, who conducted this survey with Republican pollster Bill McInturff of Public Opinion Strategies.

Still, McInturff cautions that Trump has the ability to overperform on Election Day.

Of the 68 percent of voters who say they have already voted or plan to vote early, Biden is ahead, 61 percent to 35 percent.

But among the 28 percent of voters who say they’re voting on Election Day, Trump leads, 61 percent to 32 percent.

“This is the most competitive election I could imagine if you’re down 10 points nationally,” said McInturff.

Trump, meanwhile, holds the edge among white voters (51 percent to 45 percent) and whites without degrees (58 percent to 37 percent).

And the incumbent president leads among by men by just 1 point (48 percent to 47 percent).

A majority of national voters – 51 percent – say there’s no chance they would support Trump, while 40 percent say the same of Biden.

A majority disapproves of Trump’s job

Two weeks ago, it was 44 percent approve, 54 percent disapprove.

“Over the course of his term, there have been 41 NBC/WSJ polls that have measured Donald Trump’s performance as president,” said Democratic pollster Jeff Horwitt, who also helped conduct this survey.

“In those 41 polls, there was not a single poll that produced a result where more Americans approved than disapproved of his performance as president.”

And only 40 percent approve of the president’s job in handling the coronavirus, while 57 percent disapprove – almost identical to what the last poll showed.

That contrasts with the 55 percent of voters who approve of Trump’s handling of the economy, which is one of the few bright spots for the president in the poll.

Forty-three percent of voters view Trump favorably, versus 52 percent who see the president in a negative light (-9).

By comparison, 45 percent view Biden favorably, versus 42 percent who have a negative impression of the former vice president (+3).

60 percent say nation is on the wrong track

What’s more, the poll shows that 60 percent of voters believe the country is headed in the wrong direction, while 31 percent say it’s on the right track.

Fifteen percent say the coronavirus is not a major problem.

And a combined 69 percent say the coronavirus has changed their family’s lives in either a “very major” or a “fairly major” way.

That’s compared with 31 percent who say the virus has changed their lives in only a small way or not at all.

Finally, the NBC News/WSJ poll finds 48 percent of registered voters saying they prefer Democrats to be in charge of Congress, while 43 percent want a Republican-controlled Congress.

That slight Democratic advantage is unchanged from August, when Democrats held an identical 5-point lead on this question, 47 percent to 42 percent.

The NBC News/Wall Street Journal poll was conducted Oct. 29-31 of 1,000 registered voters -- more than half reached by cell phone -- and it has an overall margin of error of plus-minus 3.1 percentage points.