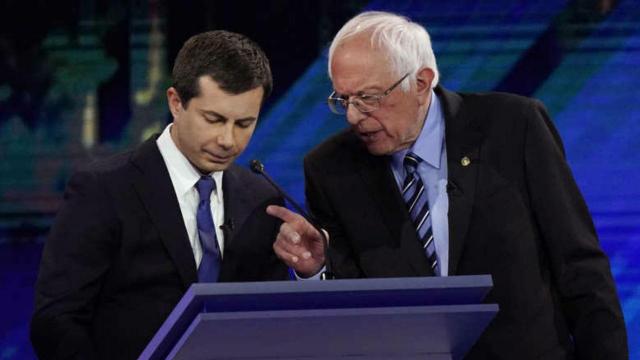 These are findings of the initial NBC News/Marist state poll of the 2020 presidential race, with the New Hampshire primary taking place on Feb. 11 – eight days after the Iowa caucuses on Feb. 3.

In this New Hampshire survey, Sanders, the independent senator from Vermont, gets support from 22 percent of likely Democratic primary voters, while Buttigieg, the former mayor of South Bend, Ind., gets 17 percent.

Rep. Tulsi Gabbard, D-Hawaii, gets 6 percent, and entrepreneur Andrew Yang gets 5 percent. No other Democrat gets more than those percentages.

The margin of error for the survey’s 697 likely Democratic primary voters is plus-minus 4.5 percentage points.

“Sanders’ advantage is bolstered by his strong support among progressive Democrats and younger voters,” says Lee Miringoff, the director of the Marist College Institute for Public Opinion, which conducted this poll for NBC News.

A Major Fear for Democrats: Will the Party Come Together by November?

“His supporters are also far more enthusiastic about his candidacy than backers of his closest rivals,” Miringoff adds.

Indeed, Sanders outperforms his rivals among self-described progressive voters, who make up 54 percent of the Democratic electorate.

He gets support from 36 percent of these progressives, versus 20 percent for Warren and 12 percent for Buttigieg.

Latinos in Iowa Prepare to Partake in ‘El Caucus’

Among more moderate Democratic primary voters (42 percent of the electorate), Biden gets 26 percent to Buttigieg’s 24 percent.

By age, Sanders laps the field with voters under 45 (getting 39 percent support), while Biden and Buttigieg are essentially tied among those 45 and older (19 percent and 18 percent, respectively).

In 2016, Sanders defeated in Hillary Clinton in New Hampshire’s Democratic primary by more than 20 points, 61 percent to 38 percent.

The poll also finds 49 percent of likely Democratic primary voters in New Hampshire saying that the most important factor to them is finding a nominee who has the best chance of defeating Trump.

Biden gets support from 23 percent of these voters – followed by Buttigieg at 21 percent, Klobuchar at 14 percent and Warren at 13 percent.

By contrast, 42 percentsay the most important factor to them is a nominee who comes closest to their views on issues.

Sanders leads among these voters (33 percent) – followed by Buttigieg (15 percent) and Warren (13 percent).

Turning to the general election, which is still some 280 days away, the NBC/Marist poll finds all Top 4 Democrats – Sanders, Biden, Buttigieg and Warren – defeating Trump in hypothetical matchups in New Hampshire, which Hillary Clinton won by approximately 3,000 votes in 2016.

Sanders and Biden both lead Trump by 8 points among registered voters, 51 percent to 43 percent.

Buttigieg holds a 10-point advantage over the president, 51 percent to 41 percent.

All but Warren’s lead is outside the poll’s margin of error of plus-minus 2.6 percentage points for the 2,223 registered voters the poll surveyed.

“President Trump is pretty much getting only his approval rating in head-to-head matchups against the top-tier Democrats,” said Miringoff, the Marist pollster.

The poll also shows Democrats enjoy a 5-point advantage in congressional preference for 2020, with 47 percent of registered voters preferring a Democratic-controlled Congress, versus 42 percent who want the Republicans in charge.

The NBC/Marist poll of New Hampshire was conducted Jan. 20-23 of 2,223 registered voters, which has a margin of error of plus-minus 2.6 percentage points.