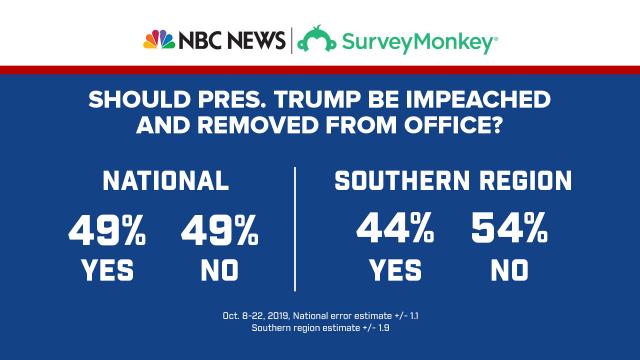 Nine in 10 Republicans and Republican-leaning independents are against impeachment and 89 percent of Democrats and Democratic-leaners are in favor of impeachment.

Independents who don’t lean toward either party are more split with a 53 percent majority saying Trump should be impeached and 44 percent saying he should not.

Among independent voters who think Trump should be impeached, 96 percent said they disapprove of the job he is doing and only 3 percent approve.

But 24 percent of independents who do not think Trump should be impeached still disapprove of the job he is doing, indicating job approval and impeachment do not necessarily go hand-in-hand for independents.

On the other hand, most Republicans who are against impeachment approve of Trump (95 percent) and most Democrats who favor impeachment disapprove of him (91 percent.)

The NBC News|SurveyMonkey national poll was conducted October 8-22 among 18,101 registered voters with an error estimate of plus or minus 1.1 percentage points. Respondents for the nonprobability surveys were selected from the almost 3 million people who take surveys on the SurveyMonkey platform each day.