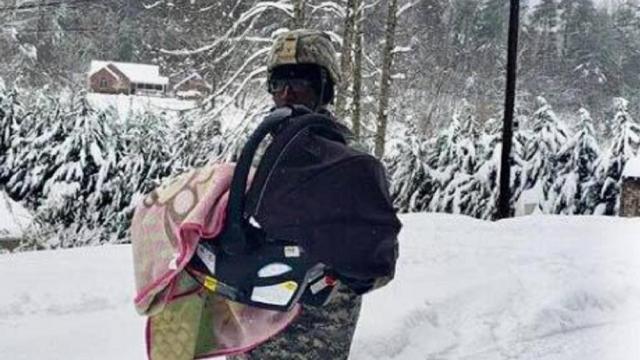 Lenoir, N.C. — A National Guard soldier said he provided emergency aid to an infant Monday who was sick at a home that was without power for three days.

Sgt. Donovan McPherson, 27, was escorting emergency responders while they drove around Lenoir, N.C., to provide back-up if the first-aid workers needed help.

McPherson, a student at the University of North Carolina at Greensboro, was traveling with an emergency vehicle when the crews received the call for help.

A tree fell recently on a power line, cutting electricity to the house where a family with a small baby had been for three days.

The family called local emergency services, and the National Guard answered the call.

"The baby was recently sick," McPherson said. "They were worried the baby would get sick again."

McPherson said the mother was attempting to carry multiple items out of the home when they were rescued, and he decided to lend a hand by carrying the baby, who was in a car seat. He said the mother was very thankful for the help of National Guard members.

"She just thanked us," he said.

He carried the baby in a car seat that was covered with blankets to keep the child warm and protected.

The solider said the family is now staying with a relative who does have electricity at their home in Hudson, N.C.

McPherson said this was his first rescue during this year's record-breaking winter weather storm. The storm has caused above average levels of participation across N.C., and over 140,000 power outages throughout the state.

The storm came after McPherson's last day of classes at UNC Greensboro and after his final exam period.

McPherson said he has enjoyed his past 11 years as a member of the National Guard and he plans to continue his service for nine more years while he gets his degree.