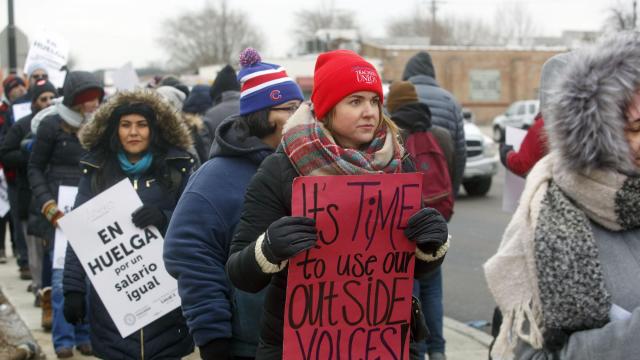 Over 500 educators in Chicago began the nation’s first strike at a charter school network on Tuesday, shutting down 15 schools serving more than 7,000 children. Teachers for the Acero Schools network rallied at local schools to call for higher pay and smaller class sizes, among other demands.

The action is the latest mass teacher protest in a year when educators have closed ranks in places where organized labor has historically been weak — first in six conservative or swing states where teachers walked out of classrooms, and now in the charter school sector, where unionization is sparse.

All of the picket lines have formed out of a dispute over public dollars — whether education funding is adequate, and what percentage of the money should go toward educator pay and classroom resources versus other costs.

“Everyone is feeding off each other and hearing this rallying cry,” said Martha Baumgarten, a fifth-grade teacher at Carlos Fuentes Elementary School in the Acero network and a member of her union’s bargaining committee. “A lot of this comes down to lack of funding. But teachers across the country are seeing each other stand up and say that’s not OK. We’re not going to support budgets and politics as usual.”

Charters are funded by taxpayers but independently managed by nonprofit organizations, like Acero, or by for-profit companies. Educators at Acero earn up to $13,000 less than their counterparts at traditional public schools in Chicago and cannot afford to live comfortably in an increasingly expensive city, according to the Chicago Teachers Union, which represents the striking workers.

In addition to higher pay for teachers and support staff, the union is asking that more money be spent on special education services for students and on a program that allows classroom assistants to continue their education and become lead teachers. The union also argues that Acero’s class sizes — up to 32 students at every grade level — are too high.

Acero says the comparatively large class sizes allow it to serve more families, noting that many of the network’s schools have wait lists. It acknowledges that its teachers, who earn an average salary of $65,000 per year, are making less than their peers in traditional schools, but says that is because of inadequate funding from the state. Rodriguez earns a salary that is competitive given his duties managing the network’s facilities and real estate, it added.

Helena Stangle, a spokeswoman for Acero, said that after the network’s teachers unionized in 2013, management has repeatedly agreed to reduce hours and shorten the work year for teachers, but that to do so any further would erode what makes the schools attractive to parents.

“The focus of the discussion today is maintaining our own identity as a network of schools,” she said. The promise of an extended school day and year is “a real differentiator and important to our families.”

The strike comes shortly after a midterm election in which a burst of progressive Democratic energy led to defeats for charter school advocates in Illinois and other states.

That teachers in a charter network were able to organize, let alone walk out of their classrooms en masse, is notable given the history and aims of charter schools.

Only about 11 percent of the nation’s 7,000 charter schools are unionized, according to the National Alliance for Public Charter Schools. Although the union leader Al Shanker helped popularize the concept of charter schools in the 1980s, intending them as laboratories for educational innovation, he became a fierce critic when reformers began using charter laws to open nonunion schools. The reformers hoped that student performance would improve outside the bureaucratic constraints of contract work rules, and that underperforming teachers could be fired more easily. Results in the charter sector have been mixed. At Acero schools, a quarter of students met standards on state exams in 2016, the same percentage who met standards in the Chicago district schools, according to a report from the Illinois State Board of Education.

As the national charter sector grew rapidly, now serving over 3 million children, it developed a complicated relationship with organized labor. Union leaders accused charters of leeching students and funding from traditional public schools, and tended to oppose the expansion of the sector. But the unions also sought to organize charter schoolteachers and, in some cases, even opened their own charter schools.

When it comes to organizing the charter sector, unions “have goals that are in some ways in contradiction” to one another, said Daniel DiSalvo, a professor of political science at the City University of New York and a fellow at the Manhattan Institute. “They want to win better things for the individual teachers, but fight back against the system they’re participating in.”

When teachers and support staff at Acero, formerly known as the UNO Charter School Network, unionized five years ago, the nonprofit that ran the schools was being investigated by state officials, and was later charged by the Securities and Exchange Commission with fraud.

The schools were originally tied to the United Neighborhood Organization, a Latino advocacy group, and were known for their English-only language immersion instruction for students from immigrant families. More recently, the network, under new management, has embraced a broader array of teaching strategies, including bilingual education in Spanish and English. Over 90 percent of the students are Latino, and the union has demanded that the network move more quickly to diversify its instructional staff, which is currently 63 percent white and 23 percent Latino, according to data from Acero.

Early this year, the union that represented teachers at Acero and other Chicago charter schools merged with the Chicago Teachers Union. Chicago was the birthplace of the teachers’ union movement in the late 19th century, and has often been a hotbed of educator activism. The Chicago Teachers Union last went on strike in 2012, when it pushed back against the school reform agenda of Mayor Rahm Emanuel, a strong supporter of charter schools.

“This activism is contagious,” said Randi Weingarten, president of the American Federation of Teachers, the national affiliate of the Chicago union. After “a couple of decades of being the shiny new object,” she said, the charter school movement is experiencing an adolescence.

“They are now in a different generation,” she added. “They’re going through growing pains, and what you’re seeing in a bunch of the different charter schools is that teachers are saying we want to make a career helping kids in this structure, but we need to have the conditions kids need and the pay we need.”