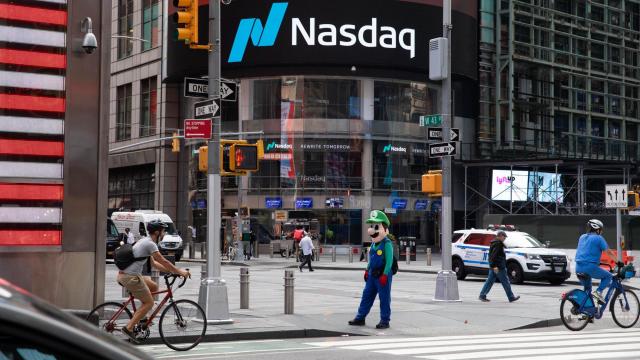 The Nasdaq Composite was the strongest performer, rallying 2.6%.

All three benchmarks inched closer to record territory once again. The Nasdaq and S&P 500 stand to beat their record closing levels from early September, while the Dow's last record finish was in pre-pandemic times.

Apple was among the top performers, with shares closing more than 6% higher. The company is slated to announce its new iPhone on Tuesday after weeks of pandemic-related delays.

Software stocks look to be getting out of the rut that dominated tech stocks in September, said Paul Hickey from Bespoke. Monday's rally is proof of that.

Otherwise, the Columbus Day holiday on Monday meant a more quiet day in terms of economic news, but third-quarter earnings season is just around the corner. The season kicks off with America's big banks, including Citigroup and JPMorgan starting to report on Tuesday.

Analysts at Goldman Sachs think earnings will paint an uneven picture of corporate America, as some businesses recovered from a disastrous second quarter while others are still struggling.

Besides earnings, the election is also fast approaching with only three weeks left to go.

"Investors are focused on the implications of a 'Blue Wave' election given that the probability of a Democratic sweep has climbed to 60% from 47% one month ago," the analysts said in a note to clients.

Investors will also have to keep an eye on headlines from Washington, where the Trump administration made a stimulus counter-offer to Democrats last week. Stocks would likely rally on a stimulus agreement, but so far, after months of negotiations, all we've got was volatility.

There are a lot of moving parts, but the most important factor for stocks is still the path of the virus and potential vaccine, the Goldman analysts said.