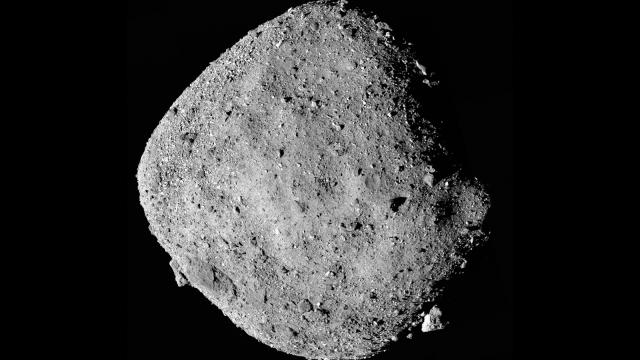 CNN — After orbiting the near-Earth asteroid Bennu for nearly two years, NASA's OSIRIS-REx spacecraft successfully touched down and reached out its robotic arm to collect a sample from the asteroid's surface on Tuesday.

That sample will be returned to Earth in 2023.

To achieve this historic first for NASA, a van-size spacecraft had to briefly touch down its arm in a landing site called Nightingale. The site is the width of a few parking spaces.

The arm reached out to collect a sample, which could be between 2 ounces and 2 kilograms. Then, the spacecraft backed away to safety.

Everything went perfectly based on the data returned by the spacecraft, according to Dante Lauretta, the mission's principal investigator and a professor at the University of Arizona Lunar and Planetary Laboratory. He said he feels "transcendent" and the team is "exuberant" based on the current data.

On Tuesday night, the OSIRIS-REx team will go through the data being sent back by the spacecraft.

The agency will be able to confirm if a sample was successfully collected later and images of the event will be available Wednesday on NASA's site.

"It's a historic first mission for NASA, returning an asteroid sample, and it's hard," said Thomas Zurbuchen, associate administrator of NASA's Science Mission Directorate, during a Monday press conference.

The site itself is nestled within a crater the size of a tennis court and ringed in building-size boulders.

Located more than 200 million miles from Earth, Bennu is a boulder-studded asteroid shaped like a spinning top and as tall as the Empire State Building. It's a "rubble pile" asteroid, which is a grouping of rocks held together by gravity rather than a single object.

Since arriving at Bennu, the spacecraft and its cameras have been collecting and sending back data and images to help the team learn more about the asteroid's composition and map the best potential landing sites to collect samples.

The main event of the mission is the Touch-and-Go sample collection event, or TAG, that occurred today.

Bennu has an orbit that brings it close to Earth, which is why it's considered to be a near-Earth asteroid. One of its future approaches could bring it perilously close to Earth sometime in the next century; it has a one in 2,700 chance of impacting our planet.

The samples from Bennu could help scientists understand not only more about asteroids that could impact Earth but also about how planets formed and life began.

"Bennu is almost a Rosetta Stone out there, and it tells the history of our Earth and solar system during the last billions of years," Zurbuchen said. "Bennu has presented a lot of challenges, but the ingenuity of the team has enabled us to get where we are."

Waiting for the moment

Rather than the so-called "seven minutes of terror" of trying to land the Perseverance rover on Mars next year, the OSIRIS-REx team has experienced "4.5 hours of mild anxiousness," according to Beth Buck, the mission's operations program manager at Lockheed Martin Space in Littleton, Colorado.

During this time, the spacecraft descended from its orbit around the asteroid and came close enough to touch it.

The asteroid and spacecraft are currently about 207 million miles from Earth, which cause a communication delay of about 18.5 minutes between the mission's team and the spacecraft.

The team at NASA has been sharing animations on the mission's Twitter account depicting what is occurring based on the commands that have already been sent to OSIRIS-REx hours ahead for the sample collection sequence.

A livestream also began at 5 p.m. ET on NASA's site that shares animations and insight from the mission team as they explain the data they're receiving.

The spacecraft performed the entire sequence of approaching the asteroid and collecting the sample autonomously since live commands from Earth were not possible.

Touching down on an asteroid

The event took about 4.5 hours total to unfold and the spacecraft executed three maneuvers to collect the sample.

The spacecraft fired thrusters to leave its safe orbit around the asteroid, which is about 2,500 feet away from the surface, and traveled for a total of four hours before reaching just 410 feet away. Then, the spacecraft adjusted for position and speed to continue descending.

OSIRIS-REx then slowed its descent to target a path so it matched the asteroid's rotation during contact. Its solar panels folded into a Y-wing configuration above the spacecraft to protect them.

At last, OSIRIS-REx touched down for less than 16 seconds. The spacecraft fired a pressurized nitrogen bottle into the asteroid, using the gas as a way to lift material off Bennu's surface.

If sample collection occurred as planned, the spacecraft's collector head captured the stirred up material. This head, located on the 11-foot-long robotic sampling arm, is the only part of the spacecraft that touched Bennu. The team compares it to an air filter in an older model car, perfect for collecting fine material.

Small discs, which can collect dust like sticky pads, are also located on the head in case part of the sampling maneuver doesn't go according to plan.

A camera on the spacecraft has captured footage of the collection event.

The OSIRIS-REx spacecraft was tasked with detecting hazards and delaying its own mission if any obstacles were to get in the way of the sample collection. Based on its simulations, the team estimated there was less than a 6% chance the spacecraft would abort the mission.

The team estimates that they will have a mass measurement of the sample on Saturday. By October 30, NASA will confirm if the spacecraft collected enough of a sample or if it needs to make another sample collection attempt in January at another landing site called Osprey.

But if everything runs smoothly, the spacecraft and its prized sample will begin the long journey back to Earth next year and land the sample on Earth in 2023.