The daily commute on Wake Forest Road can feel more like a daily squeeze: Drivers complain about feeling uncomfortable driving in narrow lanes, like they’re dangerously close to the vehicles near them.

WRAL Investigates wanted to know what impact those narrow lanes have on safety, and an examination of four years of North Carolina Department of Transportation intersection crash data reveals those stretches of narrow lanes see two or three times more crashes than the state average.

The American Association of State Highway and Transportation Officials sets standards that many states follow, including North Carolina. While AASHTO recommends lanes on interstates be 12 feet wide, it advises that arterial or collector roads like Wake Forest Road have lanes between 10 and 12 feet wide.

According to surveys done by DOT, some lanes on Wake Forest Road and where it continues under the name Falls of Neuse Road are less than 9 feet wide. With city buses that are 8 feet wide, tractor-trailers 8½ and large SUVs close to 7 feet wide, that doesn’t leave a lot of room for error.

“How did they get so many lanes on this little-bitty highway right here?” asked Matt Bowen, who lives in north Raleigh and commutes to Cary for work. “It’s just holding your breath riding through.”

Bowen also said that, with buses and large trucks in neighboring lanes, driving on Wake Forest and Falls of Neuse roads becomes even more difficult.

“It definitely makes it a stressful drive, so I try to avoid it as much as I can,” he said, noting that he often cuts through local neighborhoods with slower speed limits and more stop signs.

A few extra minutes on his commute is better than having to drive the stretch of road with tight lanes, he said. 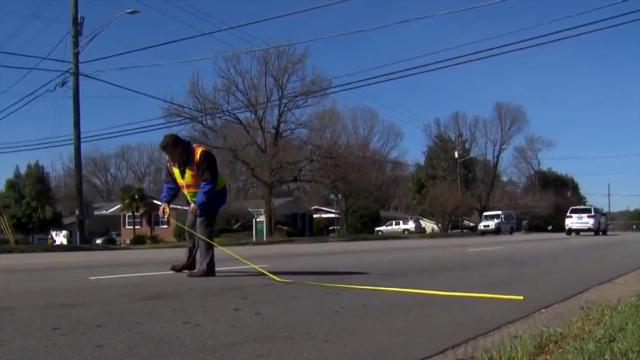 Some studies show that more narrow lanes of traffic are actually safer. A 2007 research paper by the Midwest Research Institute looked at roads in several cities, including Charlotte, and found no evidence that narrower lanes increased crashes. In fact, the paper found evidence that intersections on narrower roads in Charlotte resulted in fewer crashes.

“What we actually see in practice is that, as you narrow lanes, drivers respond to that and say, ‘This lane is more narrow. It requires more of my attention.’ So the driver is going to reduce their speed, they’re going to be less distracted,” Findley said. "The typical assumption is that, [if] you reduce the average speed on a roadway by 1 mph, you reduce crashes by 5 percent."

But that doesn't appear to be the case on Raleigh’s roads.

For example, there were 699 accidents at intersections on the 1-mile stretch of Falls of Neuse Road between New Hope and Milbroook roads, where lanes are between 9 and 11 feet wide, from 2014 to 2018, according to DOT statistics. The agency estimates about 32,000 vehicles travel that stretch of road each day.

In contrast, the same distance on Six Forks Road, which carries roughly the same amount of daily traffic but has 12-foot-wide lanes, had 363 accidents during those four years, DOT statistics show.

But local traffic designers have to consider more than just cars when they look at lane width. They also must design roads with bikers, pedestrians and other issues in mind.

“As a traffic engineer, what you should be thinking about is how do you move the most people through an area," Findley said. "That may not be [just] vehicles, and so, you've got a limited amount of space on the road.”

That’s where a holistic approach to road design and transportation comes in.

“The term that's being used is 'complete streets,'" Findley said. “NCDOT has a complete streets policy, and the idea being that we want to facilitate the full range of transportation options, not only looking at vehicles, but looking at how are we moving people on this area, on this corridor, to places they want to go."

Those designs may include planning for sidewalks, bike lanes, medians, bus lanes and crosswalks.

“With the pedestrians and the cars and the narrow lanes, it's just way too much going on for this amount of space,” he said. “It’s just a ticking time bomb."