Fayetteville, N.C. — A Fayetteville police officer is recovering after being exposed to narcotics Thursday morning.

Fayetteville police said officers were executing a narcotics search warrant at about 9:30 a.m. at a home in the 1100 block of Bernadine Street when an officer was exposed to fentanyl.

Police said the officer began showing signs and symptoms of exposure and other officers recognized the symptoms and administered two doses of Narcan, a drug used to treat opioid overdoses, to the officer, police said.

Authorities said fentanyl can be absorbed through the skin and a small amount can be deadly.

"The unfortunate thing with fentanyl, just a small amount absorbed through the skin can be deadly and that's what happened today. Somehow, that officer got exposed to it," said Sgt. Shawn Strepay with the Fayetteville Police Department.

For the past three years, Strepay said all Fayetteville patrol officers have carried Narcan nasal spray.

"They administered two doses of Narcan nasal spray to that officer in distress. He did start recovering at that time," Strepay said.

Authorities said the officer, who was not identified, was able to walk to an ambulance and was taken to an area hospital as a precaution.

Strepay said dealers are increasingly using fentanyl as a heroin substitute, even though it's considerably more potent.

Hazmat crews remained at the home and Bernadine Street was blocked off for several hours as the investigation continued. 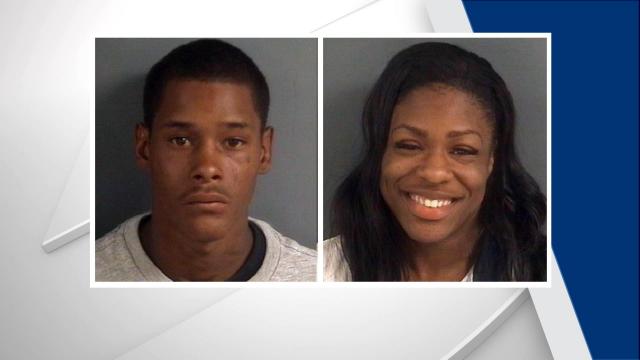 He was being held at the Cumberland County Detention Center under $20,000 secured bond.

Marqucia Byrd, 25, of the 4900 block of Fieldcrest Drive, was charged with possession of cocaine. She was being held at the Cumberland County Detention Center under $1,000 bond.

By the time an ambulance is called, people exposed to fentanyl can be in serious danger without Narcan.

"The biggest thing we're concerned about with any opioid exposure is it can take away the drive for the person to breathe. It takes away the respiratory drive, so they just stop breathing," said Assistant Chief Jeff Hammerstien with Wake County EMS.

As a result of the increase in fentanyl on the street, officers are now protecting themselves with masks and carrying Narcan.

"It's 50 to 100 times stronger than morphine. The way they mix it, sometimes we just don't know what we're dealing with," said Wake County Sheriff Donnie Harrison.

Wake County deputies have carried Narcan since 2016 to protect citizens and officers.

"If fentanyl is involved, if we get it on us, they inhale it, we've got problems," Harrison said."If you picture three or four crystals of salt out of a salt shaker, if they were to inhale it and it was fentanyl, it could kill them."

Officers in North Carolina used Narcan on others 1,089 times in the past four years. Wake County EMS used it 1,351 times between 2013 and 2015. More than 10,000 citizens who bought Narcan at pharmacies have used it to revive someone after opioid overdoses in the last four years, according to the North Carolina Harm Reduction Coalition.

"Just simply pressing on it will distribute it. It's absorbed very quickly in the nasal passages," Hammerstein said.