Pelosi holding off on vote for impeachment inquiry for now: 'We're not here to call bluffs' 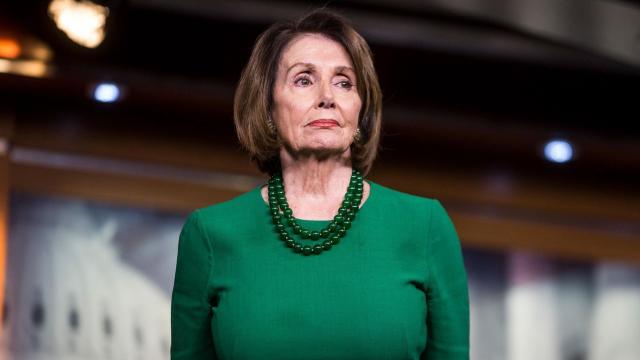 CNN — Democratic Speaker Nancy Pelosi said Tuesday she will not hold a full House vote for now to authorize a formal impeachment inquiry into President Donald Trump, a step Republicans and defenders of the President have demanded.

"There's no requirement that we have a vote so at this time we will not be having a vote and I'm very pleased with the thoughtfulness of our caucus with the path that we are on," Pelosi said in news conference Tuesday evening, following a meeting with her caucus.

Pelosi is not fully ruling out such a vote, a congressional aide confirmed to CNN, leaving her with the option to do so in the future, but she is not moving on it right now. She delivered this message to her caucus in their ongoing closed-door meeting Tuesday before speaking to reporters.

"We're not here to call bluffs. We're here to find the truth, to uphold the Constitution of the United States," she added Tuesday. "This is not a game for us. This is deadly serious, and we're on a path that is getting us to a path to truth and timetable that respects our Constitution."

While leaving Pelosi's office Tuesday, House Majority Leader Steny Hoyer and other Democrats said there has been no decision on holding an impeachment inquiry vote. Hoyer also said he didn't believe a vote is necessary.

House Majority Whip Jim Clyburn had been reaching out to Democratic lawmakers to see if there's support to hold a formal vote authorizing an impeachment inquiry, a move that could blunt a key GOP attack but could be a risky for some vulnerable Democrats, according to a source with knowledge of the matter.

Pelosi has previously resisted a House vote but signaled she would think about it to the Atlanta Journal-Constitution in an interview earlier this month.

"If we want to do it, we'll do it. If we don't, we don't. But we're certainly not going to do it because of the President," Pelosi told the paper. "It's wrong for a person to ask a foreign government to interfere in our election, and the president is doing it in full view — and in defiance of what our Founders had in mind."

Republicans have repeatedly demanded a vote to start the inquiry. During the Clinton and Nixon impeachment inquiries, the House passed inquiry resolutions to gain tools like more subpoena power and depositions, and included in those resolutions were nods to bipartisanship that gave the minority party subpoena power, too.

Republican House Whip Steve Scalise said Tuesday that "Pelosi won't even acknowledge if we're in an impeachment inquiry. She's trying to shield her members from an actual vote."

"They get to ask whatever questions they want in a process in which they have every bit as much opportunity as the majority to ask questions," the California Democrat said.

Schiff added that Democrats have made "dramatic progress in answering some of the questions" rooted in a whistleblower complaint alleging that Trump abused his official powers "to solicit interference" from Ukrainian President Volodymyr Zelensky in the upcoming 2020 election, and the White House took steps to cover it up. A transcript of the July phone conversation between the leaders released by the White House shows Trump repeatedly pushed Zelensky to investigate former Vice President Joe Biden and his son, Hunter.

There is no evidence of wrongdoing by either Joe or Hunter Biden.

Even before the whistleblower complaint was made available to lawmakers, Pelosi declared Trump had betrayed his oath of office and announced she was opening a formal impeachment inquiry into the President.