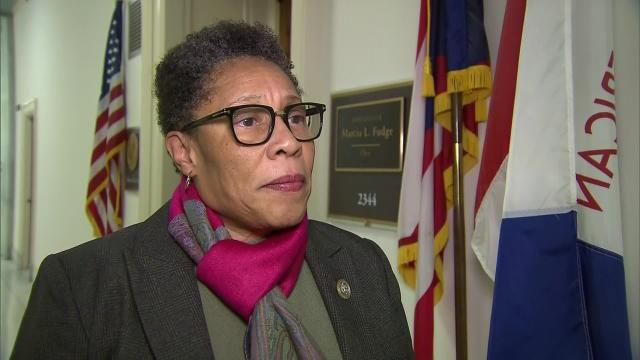 (CNN) — House Democratic Leader Nancy Pelosi met Friday with prominent Democratic critics including Rep. Marcia Fudge, an Ohio lawmaker who is considering whether to run for House speaker and challenge Pelosi, who is seeking a return to the role leading the party when it retakes the majority in the new Congress.

With Democrats' recapturing of the House majority in the midterms, Pelosi has consistently positioned herself to be the next House speaker, a position she held from 2007 to 2011. While Pelosi has been a fundraising juggernaut with allies throughout the caucus, many Democrats ran this fall on a message of refusing to support Pelosi's leadership.

Fudge was among 17 signees to a letter written by a mixture of incumbent and would-be Democratic members who pledged not to vote for Pelosi in January.

Pelosi is meeting with at least two other signers of that letter Friday, Reps.-elect Max Rose of New York and Jeff Van Drew of New Jersey, as well as two other incoming lawmakers Haley Stevens of Michigan and Mikie Sherrill of New Jersey.

Through a spokesman, Pelosi described the meeting with Fudge as "a candid and respectful conversation." Pelosi's office said the meeting was set up by Rep. Elijah Cummings, who is expected to become chairman of the influential House Oversight Committee in the next Congress.

Following the meeting, Fudge told reporters that Pelosi did not ask her specifically ask her not to run. Pelosi did ask what Fudge would need in order to support her bid, though. Fudge said she wanted to know about succession planning and being a more inclusive caucus.

"I'd like to know what her plans are. She did not share them with me. But it is something that our caucus is interested in knowing," Fudge said. "I think the biggest issue we discussed was the feeling within the caucus who are feeling left out and left behind."

She said she intends to keep in touch with Pelosi in the coming days, specifically "exchanging information" over her desire for a succession plan over the next week on that.

Fudge said if Pelosi pledged to serve only one more term as speaker that would satisfy her concerns.

"Absolutely. No question about it," Fudge said.

Fudge speculated that neither she nor Pelosi currently has enough support to win the speakership.

Fudge has said she had has had an outpouring support from colleagues encouraging her to run. Fudge, who was once the chairwoman of the Congressional Black Caucus, has received support for the group's current chairman, Rep. Cedric Richmond of Louisiana. Richmond told CNN Friday he would support Fudge over Pelosi because he's "closer" to Fudge.

"Marcia is my friend, we eat dinner together, my family knows her, and her family knows me," Richmond said. "So, there's nothing that Marcia could run for that I wouldn't support her because she's qualified and I'm not anti-Pelosi, not at all. I consider the speaker to be a very talented speaker, a remarkable speaker, I consider her to be a friend but I'm closer to Marcia, so if Marcia ran that's where I would be."

Rose said Pelosi did not give him a pitch but quipped that she offered him a Coke and he accepted.

"Just an honest opportunity for me to introduce myself and talk more," he said. "No pitch. No transactional politics."

He said they talked "only a little bit" about the leadership race and that he made himself clear that he sticks to his promises. "She understands that and it was a great opportunity to talk to her."

Pelosi has consistently made the case that she's the strongest candidate for speaker and said earlier this week she's confident her Democratic colleagues will elect her in the role. When asked about other Democrats seeking the speakership role earlier this week at a news conference, Pelosi responded "Come on in, the water's warm."

Stevens, a Pelosi critic during the campaign, said she spoke about a range of issues important to her Michigan district. She kept the door open to supporting Pelosi.

"I haven't said no," Stevens said.