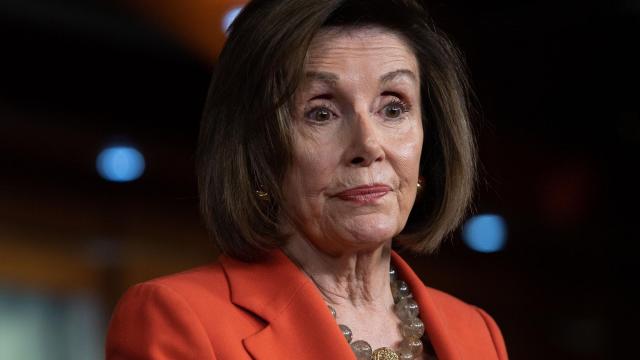 CNN — Speaker Nancy Pelosi is having a steady stream of private conversations with her colleagues to get their input about whether they're ready to impeach President Donald Trump and what they think should be included in articles of impeachment, according to multiple Democrats familiar with the matter.

Pelosi, who will make the ultimate decision on the scope of the articles and the schedule for impeachment, has publicly and privately been coy for weeks about her plans, saying she would let the process play out and refusing to put a time frame on a final vote. But Pelosi's recent conversations show that the House is nearing a crucial moment that will define Trump's presidency and could have long-lasting ramifications for the country.

Several Democrats who have spoken with the California Democrat say she is not trying to project her views about what the articles should look like but is hearing out her colleagues instead. And those conversations are expected to inform her thinking as she makes her final decision, allowing members to feel like they've had input on her decision making -- including on articles of impeachment.

It's a strategy Pelosi has employed throughout her speakership, including when she announced in late September that there should be an impeachment inquiry, after a majority of her caucus had announced their support for one. Similarly, now a vast majority of Democrats want Trump impeached and are waiting for Pelosi to give the final blessing before action is taken to make Trump the third American president to be impeached by the House.

"She doesn't follow parades," said Rep. Gerry Connolly, a Democrat from Virginia. "She leads them."

Going behind closed doors on Wednesday with House Democrats to discuss the next steps of the proceedings, Pelosi tried to convey a sense of seriousness. She would not allow staff in the room, while members were instructed to leave their cell phones in cubbyholes.

And as she went before her members, Pelosi said: "Are you ready?"

Her question focused on whether her caucus was ready to keep moving forward on the next steps on impeachment, according to two sources familiar with the meeting. Democrats in the room were vocal with their unequivocal answer: Yes.

Pelosi then offered her counsel to her colleagues: Be disciplined in your messaging and recognize that members all serve different districts with different constituencies, sources said.

"There is no anxiety on this thing, I can tell you that right now," Rep. Bill Pascrell, a Democrat from New Jersey, said after the meeting. "We're not happy we're at this point or doing this. It's got to be done, though. That's our oath of office, and we will do it."

How the articles of impeachment will be structured will ultimately be Pelosi's call. But she is working closely with some of her closest confidants and chairs of key committees, particularly House Intelligence Chairman Adam Schiff of California and House Judiciary Chairman Jerry Nadler of New York, who declared Wednesday night that Trump has committed "impeachable offenses."

Among the articles that Democrats are considering: abuse of power and bribery, obstruction of Congress and obstruction of justice. But a key question remains on whether to include evidence gleaned from the Mueller probe as part of an article of impeachment or leave the focus strictly on the Ukraine scandal that has imperiled Trump's presidency.

Democrats are working under the assumption that the House Judiciary Committee will have votes as soon as next week on the articles of impeachment, which would be followed by a vote on the full House floor the week after, finishing up before Christmas.

Yet Pelosi has so far declined to say.

As she returned from an official trip to Spain with her colleagues, Pelosi on Tuesday wouldn't reveal to her closest lieutenants where she stood. Indeed, House Democrats on her leadership team had some key questions on their minds Tuesday evening during a private meeting in the basement of the Capitol with Pelosi.

Where did she stand on impeachment? What would the articles look like? When would votes occur?

She wouldn't specify any sort of timeline, didn't lay out the scope of the articles -- and indicated to her colleagues that it wasn't even clear yet if the House would, in fact, impeach Trump.

Her message: Let the process play out.

"No, we haven't made it," Pelosi claimed to CNN when asked Tuesday night if she had made a decision on impeachment.

At a crucial juncture in the proceedings, and with the country bitterly divided, the speaker has been seeking to project an image of a House Democratic majority that is reluctant to impeach Trump. And even as she's endorsed every key decision of the fast-moving probe in the House, she is trying to balance the desire to wrap up the proceedings quickly with not getting ahead of vulnerable Democrats still nervous about impeachment.

For months, Pelosi resisted moving forward on an impeachment inquiry even after many House Democrats were loudly demanding it in the aftermath of the Mueller report detailing episodes of the President allegedly seeking to undercut the investigation into his campaign and his presidency.

But she changed her tune in the aftermath of revelations that Trump had urged the Ukrainians to investigate his political rivals, prompting her late September announcement calling for an impeachment inquiry. Yet even as the probe has revealed more damaging information about Trump's conduct, she still steadfastly refuses to say he should be impeached or to detail her plans.

That has given some of her colleagues space, like vulnerable Democratic Rep. Mikie Sherrill.

Sherrill, a New Jersey freshman who backed an impeachment inquiry, citing national security concerns over the President's conduct with Ukraine, told CNN on Wednesday that she has stayed in touch with Pelosi.

Asked if Pelosi is handling the impeachment process well right now, Sherrill said: "We'll see. I think the end result will determine that."

But she added: "One thing that I wanted was a sober, thoughtful process. This is not a road we had hoped to go down. I would say that the President's conduct really left us no other choice. But I do think it is not something that should be taken lightly, and I've been happy with the seriousness which the caucus has approached and which the speaker has approached."

Freshman Rep. Max Rose, a Democrat from a swing district in New York, said he didn't have any concerns about the lack of clarity from Pelosi, saying he's concerned only about seeing a drug pricing measure and infrastructure bill passed.

"I don't give a s--t about timelines for anything else besides those things," Rose said.

"I do not feel like we should be pushing this any faster than what the facts tell us to do," he added of impeachment. "That's what matters."

This story has been updated with more information after the hearlng.