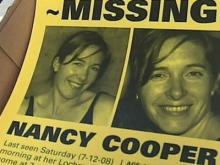 A look at key events surrounding the disappearance and death of Nancy Cooper and the arrest and trial of her husband, Brad Cooper, for her murder.

Brad and Nancy Cooper attend the barbecue of neighbors Craig and Diana Duncan in the Lochmere area of Cary, according to his testimony in an Oct. 2, 2008, deposition. Brad Cooper says he leaves with his daughters at 8 p.m., puts them to bed and falls asleep with them in their room.

Hundreds of volunteers and law enforcement authorities search for Nancy Cooper by land, air and water and distribute thousands of fliers around Cary.

A man walking his dog at approximately 7:35 p.m. near Holly Springs Road and Fielding Drive – less than three miles from Nancy Cooper's home – finds her body in a drainage ditch. (Listen to the 911 call.)

Cary Police Chief Pat Bazemore says investigators do not have a suspect or person of interest in the case but that they do not believe it is a random crime.

Police obtain a search warrant for the Coopers' home at 104 Wallsburg Court, vehicles and a DNA sample from Brad Cooper.

Brad Cooper’s attorney defends his client against “wild speculation” and “bizarre and unsupported theories” about Nancy Cooper’s death. Brad Cooper “has been very, very clear with police,” Seth Blum says. “He did not kill his wife." (Watch the news conference.)

As part of the custody challenge, Brad Cooper is deposed for approximately seven hours by Nancy Cooper’s family’s attorneys. (Watch the deposition.)

Brad Cooper is arrested and charged with first-degree murder. (Watch Cooper appear before the magistrate.

Garry and Donna Rentz reach a permanent custody agreement with Brad Cooper placing Bella and Katie in the primary care of Krista Lister.

After more than 10 hours of deliberation over three days, a jury of 10 women and two men find Brad Cooper guilty of first-degree murder. He is sentenced to life in prison.

Nearly 100 witnesses testified over a course of 36 days as prosecutors sought to prove that an angry Brad Cooper, tired and fed up with Nancy Cooper, planned her murder and carried it out in the early morning hours of July 12, 2008.

Defense attorneys argued detectives never looked beyond their client as a suspect, because they were concerned that a random murder would tarnish Cary's reputation as a safe community. They characterized police work as being "dishonest" and "inept."

The North Carolina Court of Appeals hears Brad Cooper's request to overturn his conviction. Appellate defender Ann Peterson argues that he did not get a fair trial because Superior Court Judge Paul Gessner disallowed testimony from key witnesses. "Brad Cooper had no chance," Peterson tells the three-judge panel.

The North Carolina Court of Appeals orders a new murder trial in the case after finding the trial judge erred by not allowing key testimony to be presented in the case.