NJ Transit Commute Mess: ‘A Level of Incompetence I’ve Never Quite Seen Before’ 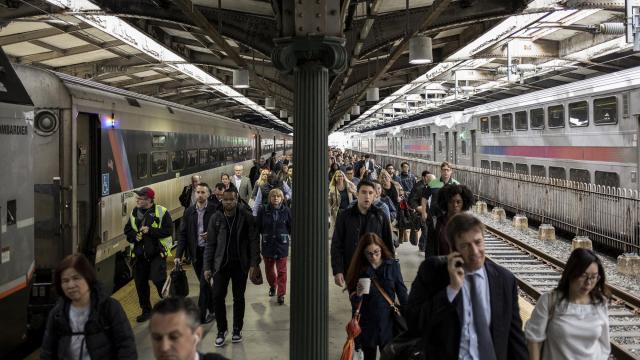 New Jersey Transit faced another round of major delays Friday that infuriated thousands of commuters, capping a week of problems that symbolized its descent from one of the nation’s best railways to one of its most troubled.

The cascade of problems increased pressure on Gov. Philip D. Murphy, who has made revitalizing the railroad a priority after taking office this year.

Just as the Friday commute was starting, an Amtrak car derailed in one of the two single-track tunnels under the Hudson River between Pennsylvania Station and New Jersey, officials said. No injuries were reported, but the effect on the commute was significant.

Amtrak reported delays of up to an hour for the commuter railroads that share Penn Station with Amtrak, New Jersey Transit and the Long Island Rail Road. Trains were largely on schedule again by early afternoon.

The delays have become a familiar refrain to riders of New Jersey Transit, the country’s second busiest railroad, and this week’s bleak streak has raised the political heat on Murphy, a Democrat, who called the transit system a “national disgrace” when he ran for governor last year.

Murphy, after inheriting a system that endured years of disinvestment and poor management, has vowed to turn things around.

“Gov. Murphy knows that nothing is more important to rebuilding New Jersey’s economy than turning around New Jersey Transit, and he remains fully committed to doing so,” said Dan Bryan, a spokesman for Murphy.

But many riders say the railroad is as unreliable as it has ever been.

The derailment meant that the week ended just as it started, with New Jersey Transit commuters suffering:

— On Monday, a shortage of engineers forced the cancellation of a train out of Manhattan. Its passengers crammed onto a later train.

That train broke down on a bridge near Newark, leaving cramped passengers stewing in darkened cars without air conditioning for more than an hour.

— The next day, a balky swing bridge, over 100 years old, caused train delays in the morning.

The same incident occurred later in the day, causing delays that spilled into the homeward rush hours.

— On Wednesday evening, a New Jersey Transit train stalled briefly as it left Penn Station in Manhattan, blocking one of the tracks to the suburbs and upsetting those who were rushing home to take children out for Halloween.

One of those frustrated parents, Dave Kass, called the delays on three consecutive days a “trifecta” of failures by New Jersey Transit and Amtrak, which owns and operates Penn Station and much of the rail infrastructure in the Northeast, including the swing bridge.

Gary Leon, who has been commuting to Manhattan by train from central New Jersey for 36 years, said he could not recall a time when the service was so unreliable.

“What’s changed in my opinion in the last two years has been just a level of incompetence I’ve never quite seen before,” Leon said. Even after paring back service twice this year because it could not muster enough engineers and equipment to fulfill its schedule, New Jersey Transit is still aggravating customers by canceling trains.

On the line that Leon rides, the railroad canceled the same train on three straight days.

Leon, 58, has been riding New Jersey Transit long enough to remember when it was a model of efficiency, held in high regard across the country.

An audit of the railroad that Murphy ordered just after his inauguration in January concluded that the fleet is so old that failing to replace any of its train cars in the next five years would pose “significant risk to the network and passengers.”

By next year, nearly 90 percent of those coaches will be at least 12 years old, absent any replacements, the audit showed.

Four of New Jersey Transit’s locomotives were 37 years old, each having traveled more than 2.2 million miles, according to the 2017 data, and more than 150 of its passenger cars were at least 40 years old.

Murphy pinned much of the blame on his Republican predecessor, Chris Christie, arguing that Christie had starved New Jersey Transit of the money it needed to maintain its fleet. But state Sen. Tom Kean Jr., the Republican leader in Trenton, said Murphy had done little to reverse the agency’s decline.

Kean said he worried that New Jersey Transit’s decline would hurt the state’s economy, driving people to choose New York or Connecticut when they look for suburban homes in the region.

“If your transportation infrastructure is uncertain, that makes a difference when an individual is trying to decide where to locate their family,” he said.

“Due to many years of underinvestment and mismanagement,'’ Bryan said in a statement Thursday, “years in which Sen. Kean was silent, New Jersey Transit has a long road back.” The problems at New Jersey Transit have been building for years and several political leaders have played contributing roles. Now, the power to rescue the railroad rests with a different set of elected officials.

During the Christie administration, the state’s direct subsidy to the agency dropped by about 90 percent. To make up for the shortfall, the agency often had to cover its operating costs with money that had been set aside to buy new equipment and other capital improvements.

Transit advocates pressed Christie, the former two-term governor, to raise the state’s low tax on gasoline to help pay for maintaining and improving the state’s rail and bus networks and its roads. But Christie was reluctant to raise the gas tax, agreeing to do it only in his seventh year in office, when the state’s Transportation Trust Fund was running dry.

Christie also made what many transit advocates consider one of the worst decisions in recent New Jersey history: In 2010, he withdrew his state’s support for a plan to build another rail tunnel under the Hudson River.

That project was already underway and construction was scheduled to be completed this year. The federal government had pledged more than $3 billion toward the project and the Port Authority of New York and New Jersey had committed an additional $3 billion.

New Jersey Transit had sponsored the project, which was designed in part to reduce the agency’s reliance on Amtrak for access to Manhattan.

After the cancellation of the tunnel, New Jersey Transit has partnered with the Port Authority to design an alternative tunnel system known as the Gateway project. That project includes the replacement of Amtrak’s Portal Bridge, the swing bridge that caused delays for commuters this week.

The Obama administration agreed to cover half the project’s cost with New Jersey and New York paying the other half. But that agreement was scrapped after Obama left office last year.

President Donald Trump has denied that any such agreement existed. Cuomo and other elected officials from the region have pleaded with Trump and Transportation Secretary Elaine Chao to reconsider. The need for new rail tunnels is especially acute since Hurricane Sandy flooded the existing, century-old tunnels with saltwater, setting off a gradual deterioration of the tunnels’ interior walls and electrical systems. Last month, Cuomo sent Trump a video of a late-night tour the governor took to inspect the conditions inside one of the tunnels.

Eventually, Amtrak will have to close those tunnels for an overhaul, Cuomo warned. But taking just one tunnel out of service would cripple the Northeast, he said, because it would reduce the capacity for cross-Hudson commuting during the rush hours by 75 percent.

The trustees of the new project’s sponsor, the Gateway Development Corp., said in a statement that the delays Friday “would not have happened with a new Gateway tunnel, which will create badly needed resiliency so trains can operate around minor disruptions without wreaking havoc on the entire Northeast Corridor rail system.”

Even with Trump’s support, the soonest a new rail tunnel could be built is several years off. In the meantime, New Jersey’s commuters will look to Murphy for relief.

But Murphy has warned repeatedly that fixing the railroad will take time and that significant improvement will not come before next year. For the rest of this year, New Jersey Transit is focused on meeting a Dec. 31 federal deadline for installing equipment for Positive Train Control, a system for automatically slowing speeding trains to prevent collisions and derailments. The agency has taken extreme measures to meet that deadline, including severe reductions in its schedule and the temporary suspension of an entire train line, the Atlantic City line, which crosses the southern part of the state.

Bryan said that once the installation of the equipment is completed, “NJ Transit commuters will see restoration of service and the agency will shift its full focus to improving reliability and on-time performance.”