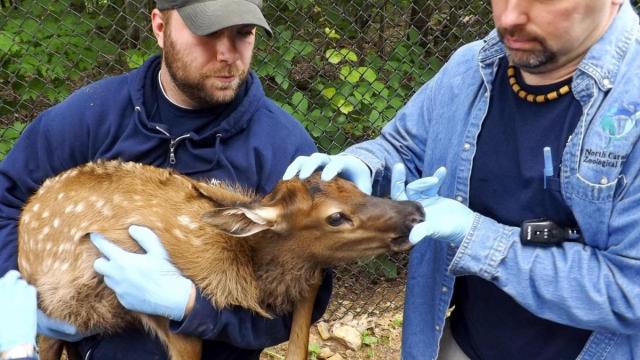 The North Carolina Zoo has a little something to celebrate.

The very first elk calves ever born at the Asheboro destination arrived late last month. A male calf was born on May 28 and another male and a female were born May 30 – one to each of three mothers, according to a zoo press release.

The zoo now is home to 11 elk, but it looks like even more little ones could be on their way. Keepers suspect that two more females are pregnant and will give birth in June. The gestation period for a female elk averages about 250 days. The offspring, usually a single calf, weighs about 35 pounds.

When the zoo opened its North American Prairie Habitat in the mid-1990s, it included a herd of eight elk purchased from zoos. That included a male elk, who had had a vasectomy. More elk were brought into the exhibit in 2012 and 2014. When the original male elk died in 2014 at the age of 20, zoo officials started looking for a new breeding male. Two bulls aren't compatible in the same space, according to the zoo.

In 2015, the zoo introduced a new breeding male to the herd.

About one million elk still live in North America - just 10 percent of the estimated population before Europeans settled North America, the release says. The last elk in North Carolina was believed to have been killed in the late 1700s.

Efforts to rebuild the state's elk population are taking place in western North Carolina. In 2001, as part of an experiment, 25 elk were reintroduced into the Great Smoky Mountains National Park. Another 27 animals were imported by the park in 2002.

Today, about 150 elk are in the park where they are monitored and managed. The N.C. Zoo and private ranches are the only other places where elk are found in the state.

It's been a big few months for the zoo. A red wolf pup was born earlier in May. Last weekend, it opened Air Hike, a ropes course. The new Zoofari ride also is now open.