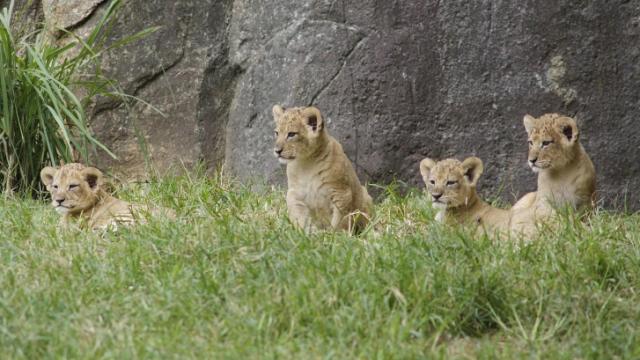 You've seen the adorable pictures. Now you can have a chance at naming the four lion cubs - two females and two males - that were born to mom Mekita at the N.C. Zoo this summer.

The four cubs went on exhibit last week. Because of the zoo's conservation projects aimed at saving lions in the wild, people are asked to submit names that have an educational value, according to a press release.

Here's are details about what the zoo is looking for: "Names submitted for the lion cub contest can relate to places in Africa, the natural habitat or natural abilities of lions or the culture of people in African countries where lions are natives. If more than one person submits the same name chosen as a winner, a drawing will be held to determine the winner. Zoo lion keepers will pick the four top entries and each winner will receive four zoo tickets apiece and a lion themed gift bag with items from the zoo’s gift shops. The contest will be conducted on the zoo’s website ... and will end Oct. 6."

“All the world’s big cats are highly endangered. We need to take action now to save them,” said Dr. David Jones, the zoo’s director, in the release. “Through our conservation efforts the zoo is constantly helping to save many endangered species and bringing awareness to the dangers they encounter.”

Among the zoo's lion conservation projects is a partnership with the Ruaha Carnivore Project in Tanzania. The group monitors the lion and other carnivore populations in the Ruaha National Park. The zoo has provided mobile devices that helps make computer data entry and analysis faster and more effective, according to the release. The zoo also is working with Panthera, which protects lions and other carnivores in Zambia and Zimbabwe.

The lion cubs will likely eventually go to other zoos, but they should be here for at least another year, Gavin Johnson of the N.C. Zoo tells me.

Here's some video of the cubs with their mom. The zoo is in Asheboro about 90 minutes from Raleigh.