Raleigh, N.C. — North Carolina shut down its public school system for at least two weeks Saturday, and the governor banned mass gatherings of more than 100 people, ratcheting up the state's response on COVID-19.

The school closure was a change of heart for Gov. Roy Cooper's administration, which had resisted this step as recently as Friday afternoon, citing Centers for Disease Control guidance that didn't recommend closure and hasn't changed in the last 24 hours.

The concerns of parents, teachers and others precipitated the move, Cooper said, as did the patchwork of closures popping up as local systems made their own calls to close.

"I don't want any regrets in our rearview mirror when this pandemic subsides," the governor said during a Saturday afternoon press conference.

Secretary of Health and Human Services Mandy Cohen, a medical doctor, called the decision "an incredibly hard and complex one." The governor said teachers will continue to be paid and that a working group will drill down on online learning options, feeding plans for children who may otherwise go hungry, child care for health workers who are also parents and the slew of other issues now in play.

The mass gatherings ban solidifies recommendations the governor put out Thursday, making them mandatory. Restaurants, shopping malls and other retail centers aren't subject to the ban, which the governor indicated was a response to event organizers refusing to voluntarily cancel large events.

"No concert is worth the spread of this pandemic," Cooper said. 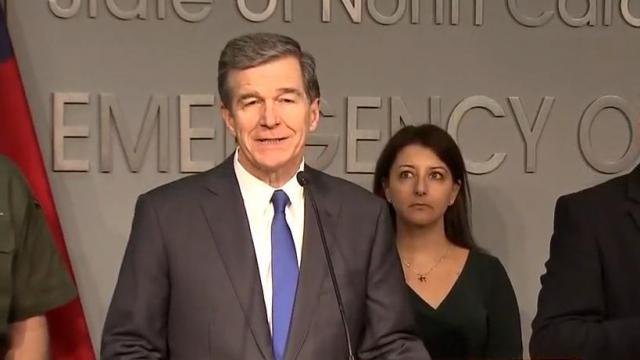 The governor said state officials don't believe North Carolina, which reported its 24th case of COVID-19 Saturday, has seen community spread yet of the virus, meaning all the instances so far tie back to a known, direct contact with someone else who has the illness.

That's an important threshold in measuring the virus' spread, and Cohen said the state is going beyond recommendations, given that the state hasn't crossed this threshold.

"We are acting as if community spread is here even though it isn't," she said. "I think we have put North Carolina on firm footing."

“We are all in this together and although these measures will undoubtedly present some serious challenges to our faith communities and working parents, it’s vital that we protect the health and well-being of North Carolinians," Tillis said. "The next several weeks are crucial to containing the spread of coronavirus and combatting this pandemic, and I applaud Governor Cooper for taking these important steps.

"By taking precautions and following the guidelines of our local and state officials, we will better protect the health of our loved ones and get through this as soon as possible.”

Officials said Saturday that a Wake County teacher tested positive for COVID-19, but Cooper said that didn't play a role in the decision to close schools statewide. Cohen said the Wake County health department is doing contact tracing now, determining who the teacher interacted with recently.

The governor also said the state is gathering more information on the total number of COVID-19 tests that have been processed in the state, something officials haven't been able to catalog since private labs starting testing. So far, those labs are only reporting positive tests to the state, but Cooper said more information will be available soon.

Between the state lab itself and LabCorp, which is based in North Carolina, Cohen said the state has seen "well over 500 tests," all but 23 of them negative.

Problems remain in the testing supply chain, though, and state officials have refused to put numbers on the difference between tests performed and tests needed.

Cooper and Cohen continued to acknowledge Saturday that there aren't enough tests, though Cohen said the situation is improving.

"I don't want to say there aren't continued challenges on the horizon," she said.

The protocol now is for doctors to test anyone who has a fever, a cough and who has already tested negative for the flu, Cohen said. Anyone meeting that description whose doctor refuses to test them can contact their local health department, Cohen said.

"We've been sharing that information for many days," she said of the protocol.

Patients should call their doctor first, not just show up at the office seeking a test.

"We are doing everything we can to make sure that everybody who should get a test is tested," Cooper promised.

Cohen and other state officials continued Saturday to stress the importance of social distancing and good hygiene. Wash your hands, frequently, for 20 seconds using soap and warm water. Try to stay at least six feet away from other people and, if you are sick, stay home and away from others.