The 3-foot-tall structure was installed upright in a raised flower bed located on the sidewalk on Hay Street.

The three-sided, bare structure immediately sparked the curiosity of downtown’s merchants, residents, and visitors alike. The monolith has left them questioning who is behind it and how it arrived here.

The Cool Spring Downtown District (CSDD), the City of Fayetteville’s managing partner to its dedicated arts and entertainment district, first shared a post about this occurrence on its Facebook page.

Throughout the day, people stop to snap a selfie and to speculate about the the origins of the new monolith.

“When I came in to open the shop, the shiny, tall structure in the flowerbed caught the light and surprised me. I thought, is it public art or holiday décor?" said Angela Malavé, owner of downtown's The Coffee Cup.

“Maybe its Banksy!! Or an artist like him – somebody in sculptures instead of painting," said resident Sheila Marie Gaston.

The city has cameras installed around downtown, and the Fayetteville police Sergeant Jeremy Glass spotted something.

On Dec. 3 at 5 p.m., a camera captured a man getting out of a white van from the Blashfield Sign Company. Glass couldn't release the video but said that "someone is clearly putting the pillar in the dirt."

WRAL News approached the the sign company to inquire. The owner, Matt Blashfield, didn't want an interview. When asked about the installation, he chuckled and mentioned that he had stopped to take a picture of the monolith but didn't put it there.

No one has stepped forward to take credit for Fayetteville’s mini monolith, and Cool Spring Downtown District’s Chief Executive Officer Bianca Shoneman was just as amused as the community was to see it randomly appear alongside downtown's main thoroughfare.

“This year's continued to take all of us by surprise with its many twists and turns,” Shoneman said. 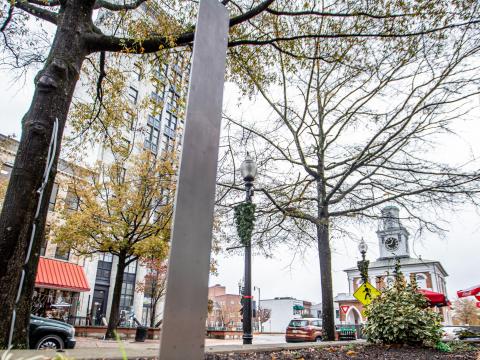 The first monolith sighting was reported by “wildlife biologists performing a helicopter survey of bighorn sheep” over a Utah desert on Nov. 18, 2020, according to a story by the Associated Press. That monolith disappeared within 10 days, but two more sightings of similar-looking monoliths then occurred in Romania and California, resulting in mass speculation over the origin and reason for these seemingly random installations.

News of the strange discovery went viral online, with many pointing out the coincidental similarities with sci-fi classic 2001: A Space Odyssey.

Big brands like Walmart, McDonald’s, and Home Depot have jumped on this phenomenon with memes that play on the monolith sightings, as compiled in an article by AdAge. These memes have further incited many social media users’ theories that some or all of the sightings are part of one big marketing ploy by an unknown corporation with a marketing agenda.

While CSDD cannot explain its own monolith’s role in this 2020 phenomenon, Shoneman humorously acknowledged the reason it is already providing visitors an alluring photo-op: “As word has spread, we've been delighted to see many curious visitors coming downtown to take their photo with this outer-space structure before it disappears.”

“There’s likely a very logical reason for our monolith’s appearance,” Shoneman continued, “but while we wait to find out if there’s a human or alien motivation behind it, we’re adopting downtown’s newest art installation as one of our own.”

Fayetteville police say that whoever put it there will not be cited.