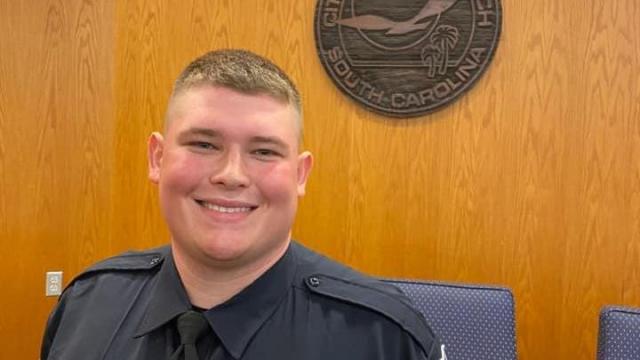 Myrtle Beach, S.C. — A Myrtle Beach police officer died in the line of duty on Saturday night, according to officials.

Jacob Hancher, who had been a community service officer for four years and a police officer for less than a year, died from a gunshot wound at around 10 p.m.

The gunman involved in the shooting is dead, according to authorities. The name of the person involved has not been released to the public.

Agents with the South Carolina Law Enforcement Division have been called in to investigate, according to officials.

SLED officials said that Hancher and other officers were responding to a domestic violence call on 14 Avenue South. There was a heavy police presence in the area at the time of the incident, according to officials.

“Following the exchange of gunfire, the suspect was discovered deceased,” a SLED press release stated.

A second officer was also injured during the shooting, officials said.

It is not yet clear what exactly led up to Hancher and the suspect's death.

Amy Prock, chief of police for the Myrtle Beach Police Department, made an announcement on the department's Facebook page asked for prayers for Hancher, his family and for the police department.

"Today, we are mourning the loss of one of our officers, Officer Jacob Hancher. He was killed in the line of duty while responding to a call for service," Prock said. "He was a dedicated public servant who upheld his oath to protect his community and made the ultimate sacrifice."

The Catholic Church of St. James in Conway, S.C, posted on its Facebook page that Hancher was a parishioner at the church.

Brenda Bethune, mayor of Myrtle Beach, called the death a "senseless tragedy" on her Facebook page.

Bethune said he was "killed while striving to be a peacemaker."

"He cared about the people he served, he served with, and absolutely loved Myrtle Beach," Prock said in the video.

Several different law enforcement agencies in the area have been sharing messages of condolences to the Myrtle Beach Police Department after Hancher's death.

“We stand with you Myrtle Beach Police Department. Our hearts are always with you,” a post on the Horry County Sheriff’s Office Facebook page said.

In 2019, there were 45 officer-involved shootings across the state, SLED said, and one involved the Myrtle Beach Police Department.

No other officer with the Myrtle Beach Police Department has died this year, according to a database Officer Down Memorial Page.

Cpl. Michael Ambrosino with the Horry County Police Department died on Aug. 19 from the coronavirus, the database says.