My Brother Wants Me to Keep His Depression a Secret 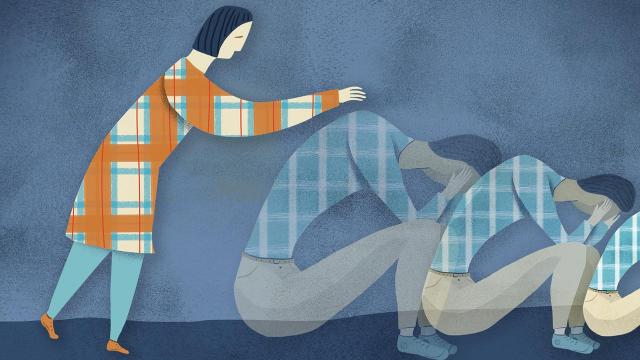 My younger brother is a 19-year-old college sophomore who’s always been extremely shy and isolated from the family. None of us has ever heard him laugh, and it’s rare even to see him smile. A few months ago, he showed up at our father’s birthday party and headed straight for his room without saying a word to any of our aunts, uncles or cousins.

Being the hotheaded sister I am, I stormed up to his room to give him an earful about his rude behavior. As soon as I opened the door, I could see something was off; he was lying on his bed with tears in his eyes, unable to speak. He eventually confessed that he has been feeling depressed for years, and that this was not the first time he’s had this type of episode. He begged me not to tell our Asian immigrant parents, who he fears will never understand what he’s going through. I told him that I would help him get the help he needs, and that I would always support him no matter what. I also promised him I wouldn’t tell a soul.

Since then, my brother has grown even more isolated and refuses to get the help he needs. It’s been especially difficult keeping this secret from my parents. They don’t understand why he would rather spend weekends alone in his cramped dorm room than with the family. I can hear the heartache in my mom’s voice when she’s on the phone with him. My brother is never apologetic, claiming that he acts this way because of his mental illness. I’m upset with him, and don’t believe his mental illness excuses his actions. How do I deal with these feelings? Should I tell my parents about his depression? Or wait until he’s ready to tell them on his own?

Steve Almond: You did just the right thing when you told your brother you’d help him get help, and that you’d always support him. That was exactly what he needed to hear. And it was especially heroic, given your anger at him. You now face the hardest part: following through on those pledges. Before anything else, I advise you to educate yourself about depression. It’s vital that you understand how debilitating an illness it is. Your brother is in tremendous pain. He’s both frightened and ashamed. That’s why he’s avoiding your family, and isolating himself. Your priority should be helping him talk about his feelings with someone, as a first step to managing his mental health. A therapist would be ideal. A support group would also be great. Both resources are available right on campus. Continue to encourage him, and listen without judgment.

Your brother’s behavior at your father’s birthday party was inconsiderate. But more important than that, it was a cry for help. You heard that cry, and responded with extraordinary patience and grace. That’s why your brother was honest with you, after years of bearing his pain in secret. As frustrating as it is to keep that secret, it means your brother doesn’t feel safe confiding in your parents just yet. His pain will only be healed when he starts to treat his depression.

Cheryl Strayed: I understand your decision to keep the conversation you had with your brother confidential, Concerned, but I don’t think that means your worries about him must remain secret. You don’t need to say to your parents that your brother told you he was depressed in order to share your concerns about him. In fact, it’s apparent to me that his mental state is already no secret. Your parents are well aware of his lifelong melancholy and tendency to isolate. So talk to them about it. Tell them you’re worried about your brother’s well-being and that you think he’d benefit from seeing a mental health professional. Ask them if they have concerns as well.

Your brother has told you he fears that your parents won’t understand his struggles, so perhaps you can drive home the urgency of his mental health. By educating them about depression and its treatment, you may be able to begin to destigmatize it for them. At the very least, it’s vitally important that you try, especially since your attempts to intervene directly have thus far failed. While your brother is legally an adult, he is also a college student who lives on campus, so your parents may have leverage when it comes to connecting him with mental health resources at school.

Almond: As someone with friends and relatives who have struggled with depression, I want to recommend that you read the book “Darkness Visible,” by William Styron. It’s quite short, and it really helped me realize that behaviors I had pegged as insensitive or selfish were, in fact, disguised expressions of sorrow. I was also able to understand depression as a disease of hopelessness. (“It is hopelessness even more than pain that crushes the soul,” Styron observes.)

I stress this because what’s most concerning here is that your brother is not seeking help at the moment; his depression has drained him of hope. It’s not your job to turn your brother into an optimist, or to orchestrate his reconciliation with your parents. Those burdens are bigger than you, and taking them on alone will crush you. But you can help your brother reckon with his illness and encourage him, in no uncertain terms, to treat his depression via talk therapy, medication, exercise, a support group — whatever combination works for him. This is likely to be a thankless task. It will help to remember that you are a loving sister and that your brother is lucky to have you in his corner, even if he can’t acknowledge it right now. Do what you can, Concerned, and forgive yourself the rest.

Strayed: Steve’s right. There’s a lot you can do to help your brother, Concerned, but there’s also a limit to your control over his life. Ultimately, it’s up to him to seek the help he needs. Everyone who has ever loved someone with an untreated mental illness or addiction knows how complicated and heartbreaking it is to be in your position. You may find that in supporting him, you need support, too. I encourage you to visit the website for the National Alliance on Mental Illness (www.nami.org), which has a wealth of resources for those who struggle with mental health and also for their family members and caregivers. No matter what your brother decides to do, just remember that you also deserve help and have tools at your disposal.