In Wake County, crews were servicing a break in the 500 block of McDowell Drive near Stadium Drive, according to Wake Forest police. Due to water rushing across the roadway, Stadium Drive was closed Sunday morning but reopened by 1 p.m.

A press release from the Town of Wake Forest stated that the water main break was affecting approximately 15 apartments in the vicinity of Southeastern Baptist Theological Seminary, forcing the evacuation and relocation of those residents.

Another water main break was reported in Person County in the 300 block of Main Street. Roxboro police said one lane of Highway 501 is blocked due to ice on the road.

⚠️@CityofRoxboro crews repairing a water main leak on 300 blk of Main St. Police have 1 lane of Hwy 501 blocked at Oak St due to ice. Salt being deployed. Use Caution in this area.⚠️ #MoverOverLaw pic.twitter.com/bSGorbR1qr

Two water main breaks were reported in Southern Pines, and officials said they are connected. According to officers, the first break occurred around 9:30 a.m. at Old U.S. Highway 1 and U.S. Highway 1. The second break, which is on the same line, closed the road at S. Bennett Street and Old U.S. Highway 1 to Morganton Road. 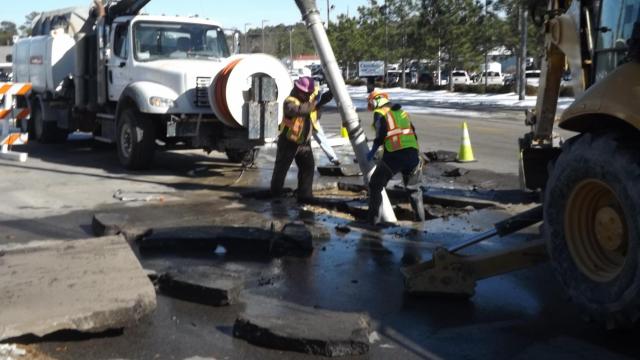 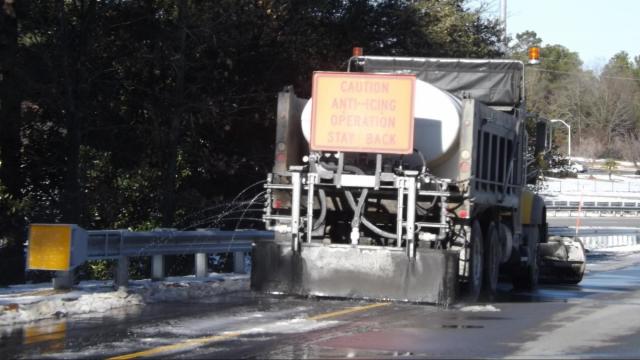 In Durham, a water main break was reported on Pettigrew Street during the afternoon.

In Raleigh, a pipe burst inside the Alexan Apartments complex in the 4200 block of Lassiter Mill Road as a result of freezing and thawing, displacing residents and causing at least one North Hills business to close as a result.

Well, we had a fun end to our inventory day. Due to a burst pipe and flooding at North Hills, we will be CLOSED tomorrow (1/8/18) until we get power back on. We will post as soon as we are able to open! Thank you for your patience. pic.twitter.com/iSDKFPtOU2

"I didn't know what to do. I got off early, I realized it was like 8 p.m. and was like 'What do I do? Where do I go?' But everything was closed, so there really wasn't much to do," he said.

A utility spokeswoman said the problem began when a valve broke on a 16-inch line and another pipe sprung a leak. The breaks, likely caused by the cold, had been fixed by Sunday evening, but the lines must be flushed and tested before the advisory can be lifted.

In the meantime, bottled water was evaporating from store shelves around Fayetteville as homeowners struggled with the boil water advisory.

"I have buckets all over the house with water that we boil and set aside. Yes, it's real inconvenient, but it happens sometimes," said resident Lissette Colon.

Officials said the area is expected to remain under a boil water advisory until Monday evening, but the water is safe for showering and brushing teeth.

Some without power as cold weather persists

Meredith Archie, a representative from Duke Energy, is also attributing the cold to power outages in the area. Around 150 customers near N.C. 42 in Clayton were without power on Sunday as well as 170 customers in Cary in the SW Maynard Road area.

"Both of these outages were caused by the extremely low temperatures and equipment malfunction as a result," said Archie at 2:30 p.m. "Crews are working on the one in Cary. The Clayton one has been restored – though there are still some small scattered outages in that area that our crews are working on as well."