20 Are Killed in Shooting in El Paso 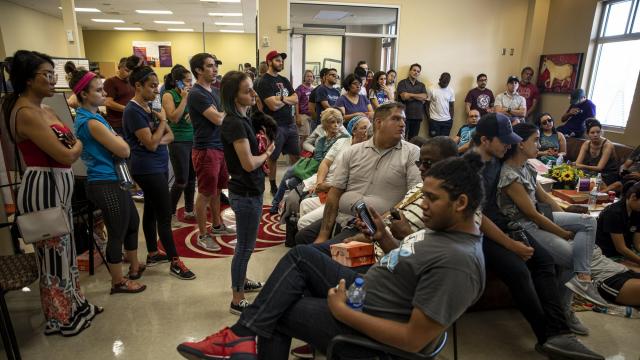 EL PASO, Texas — A 21-year-old gunman armed with a powerful rifle turned a crowded Walmart store in this majority-Hispanic border city into a scene of chaos and bloodshed Saturday, stalking shoppers in the aisles in an attack that left at least 20 people dead and 26 others wounded, authorities said.

For several minutes late Saturday morning, the packed Walmart near the Cielo Vista Mall on the city’s East Side filled with gun smoke and the echo of gunfire. Workers and customers, some bloodied, fled out the doors. Others huddled in the aisles or on the ground.

“Texas grieves for the people of El Paso today,” Gov. Greg Abbott told reporters. “On a day that would have been a normal day for someone to leisurely go shopping, turned into one of the most deadly days in the history of Texas.”

Manuel Uruchurtu, 20, had just paid at the cash register and was walking out of the store when he heard the sound of shots. He turned around and saw the gunman holding a long gun and wearing what looked like shoulder pads. As Uruchurtu fled the store, he saw two bodies on the ground outside, one surrounded by a pool of blood.

“I saw people crying: children, old people, all in shock,” he said. “I saw a baby, maybe 6 to 8 months old, with blood all over their belly.”

The authorities identified the gunman as Patrick Crusius, from a Dallas suburb. He was taken into custody after he surrendered to the police outside the Walmart. The authorities said they were investigating a manifesto Crusius, who is white, might have posted before the shooting, which described an attack in response to “the Hispanic invasion of Texas.”

“Right now, we have a manifesto from this individual,” El Paso’s police chief, Greg Allen, told reporters, although he said later that law enforcement officers were still not clear whether the gunman had posted the document.

The manifesto the chief appeared to be referring to was an anti-immigrant online screed titled “The Inconvenient Truth.” The post declares support for the gunman who killed 51 people in Christchurch, New Zealand; outlines fears about Hispanic people gaining power in the United States; and appears to discuss specific details about elements of the attack, including weapons. The four-page manifesto was posted on 8chan, an online forum where the Christchurch gunman also announced his attack. It appeared to have been published at 10:20 a.m., 19 minutes before the first 911 call, according to an archived version of the website

“Hispanics will take control of the local and state government of my beloved Texas, changing policy to better suit their needs,” the manifesto said. It added that politicians of both parties were to blame for the United States “rotting from the inside out” and that “the heavy Hispanic population in Texas will make us a Democrat stronghold.”

The shooting came six days after a gunman killed three people at a garlic festival in Gilroy, California. In that shooting, the gunman shot and killed himself after exchanging gunfire with the police. The massacre in El Paso was the deadliest U.S. mass shooting since November 2017, when 26 people were killed in a church shooting in Sutherland Springs, Texas.

President Donald Trump was briefed on the shooting, and administration officials said they were monitoring the situation. “Terrible shootings in El Paso, Texas,” Trump said on Twitter. “Reports are very bad, many killed.”

The president pledged “total support of Federal Government” to state and local authorities, and spoke about the shooting with Abbott, the governor, who headed to the scene of the attack Saturday afternoon.

El Paso has long been both a cultural and political symbol of Hispanic Texas.

The city has had a binational feel because of its proximity and ties to its sister city in Mexico, Ciudad Juárez, and has been in the national spotlight for months. Thousands of Central American families have flooded the city and surrounding areas seeking asylum, overwhelming the Border Patrol and nonprofit groups working with immigrants.

The waves of migrants, and the difficulty the Trump administration has had providing shelter and medical care for them, have been a focus of Democratic lawmakers and Democratic presidential candidates in an election campaign in which immigration has become a central issue. But the city has also been home to generations of Mexican Americans who consider themselves more Texan than Mexican. On a clear day, Mexico is visible from the shopping center parking lot.

Some of the wounded on Saturday were identified by the authorities as Mexican citizens, including a 10-year-old girl. “It tells us something about the hate and the animosity that exists out there in the nation,” said one longtime El Paso lawmaker, state Sen. José Rodríguez. “And it seems to always be some of these young people that they’re getting, I guess, irrationally distorted about what’s happening in the country.”

The possibility that an anti-Hispanic motive might be behind the attack angered and startled residents and officials in the city of 682,000.

“This is about hate,” El Paso’s Democratic congresswoman, Rep. Veronica Escobar, said in an interview.

Officials said it was too early to discuss possible motives, but Allen, the police chief, said the attack had “the nexus at this point and time to a hate crime. The FBI will be looking into that with other federal authorities.”

The FBI is reviewing evidence to determine whether to move forward with federal charges, said Emmerson Buie Jr., the special agent in charge of the FBI in El Paso. But he said that the bureau had not determined whether the shooting was a hate crime, an act of domestic terrorism or some other federal crime.

Texas authorities said they were conducting a murder investigation, with the potential for other lines of inquiry.

Crusius lived with relatives in the Dallas suburb of Allen. In an upper-middle-class neighborhood of two-story homes with neatly manicured lawns, an FBI agent was stationed outside the house and prevented reporters from knocking on the door. “We’re not sure if it’s secure yet,” the agent explained. State and federal officers later blocked the streets leading to the house.

Crusius appeared to live with his grandparents. A neighbor said that he saw the couple’s grandson a few times and that the young man showed no abnormal behavior or appearance. In El Paso on Saturday night, more than 200 people gathered at St. Pius X Catholic Church for a vigil for the victims and their families. “Any of us could be dead right now — that’s how close it feels,” said Celina Arias, 44, a schoolteacher who attended the vigil. Her husband had been outside the Walmart putting gasoline in their car minutes before the gunman opened fire.

“I just want the families who are mourning to know they’re not alone,” she said. “It’s hard to imagine the pain they are experiencing.”

The gunfire began shortly before 11 a.m., in a popular commercial district with scores of restaurants and stores that are often crowded on the weekends. The Walmart store was packed at the time.

The time stamp on security-camera footage showed that the gunman walked in at 10:39:35. Allen said the first officer on the scene arrived six minutes later, at 10:45 a.m.

Sergio Armando Samaniego, 40, a clerk in the store’s garden center, said he believed the gunman entered through the automotive section. Samaniego had been on break and was headed back to the garden center when he heard gunshots.

“I’m lucky,” Samaniego said. “One of my friends was shot. I saw another customer running out of the store with a shot in his back. I’m just shocked.”

Another worker, Victor Gamboa, 18, who works at the McDonald’s inside the Walmart, said he had heard shots and saw smoke. “I saw a man on the floor full of blood,” he said. “He appeared to be dead. It happened very quickly.”

Gamboa said he and other McDonald’s workers sheltered the customers to keep them safe and huddled on the floor for 15 minutes. Officers eventually arrived and escorted the group to a Sam’s Club store across the street.

Victor Guerrero, a spokesman for Del Sol Medical Center, said the hospital was treating 11 victims ranging in age from 35 to 82. Nine were in critical but stable condition and two were stable.

The University Medical Center of El Paso received 13 patients, according to Ryan Mielke, the hospital’s spokesman. He said two minors, including a 2-year-old, had been stabilized and transferred to El Paso Children’s Hospital. A state lawmaker whose district includes the Walmart, Rep. Cesar Blanco, was at home when he heard about the attack. Blanco, a Democrat and Navy veteran, rushed to his district office, which is near the mall, and later joined other officials in assisting grief-stricken families at an emergency center set up at a middle-school where Blanco was once a student. About 50 to 75 family members were gathered in the school cafeteria, he said.

“Right now the families are in shock,” Blanco said, describing the sounds of “wailing and screams” from family members whose loved ones were among the victims. “This is terrorism. This is domestic terrorism.”

Beto O’Rourke, the Democratic presidential candidate and former Texas congressman who represented El Paso for years, canceled his campaign events in Nevada and California to return to the city. On Saturday, speaking at a Las Vegas candidates forum before he departed for El Paso, O’Rourke teared up.

“A lot of injury, a lot of suffering in El Paso right now,” he told the audience. “I’m incredibly sad and it’s incredibly hard to think about this. Very hard to think about this, but I’ll tell you, El Paso is the strongest place in the world.” Frida Murga, a student at the University of Texas at El Paso, was at a town hall meeting hosted by Escobar, the congresswoman, at Coronado High School, when news of the shooting was announced.

“A man had actually just asked Congresswoman Escobar to let the president of the NRA know that he wanted to debate him on gun violence,” Murga said. The man was a veteran and said he did not value guns more than lives.

One by one, police officers at the town hall left, and one of the staff members approached the congresswoman to let her know the police wanted everyone to evacuate.

“I didn’t realize it would be this serious,” Murga said.