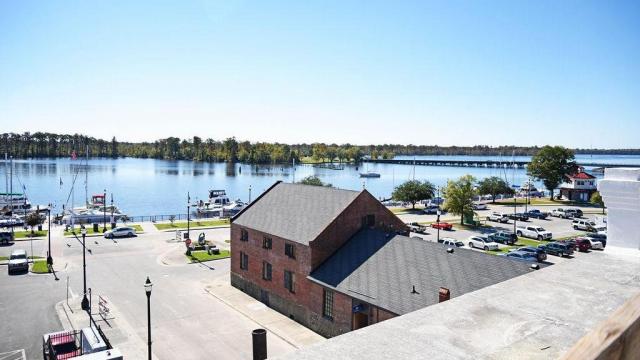 This article was written by our sponsor, Washington Tourism Development Authority.

The Greek philosopher Plato once said, "He was a wise man who invented beer."

Certainly, a refreshing libation, tasty cuisine, and good company are some of life's greatest pleasures, and the Mulberry House Brewery in Washington is aiming to offer all three and more this spring.

Bought in 2015 by Mohamed and Dr. Reem Darar, and Justin and Sunny Fejfar, the Fowle Building on Main Street was chosen and was originally going to be called Castle Island Brewery.

Upon further research, it was discovered that a successful brewery by the same name already exists in Maine. So the name was changed to the Mulberry House, after a historic building down the street, which was one of the very first taverns in the port of Washington.

Director of Operations Daniel Beedle said they researched Washington's past to inspire the name.

"We really liked the idea of taking some of Washington's history and making it applicable to today," he said.

Beedle and his wife have experience in the restaurant and consulting businesses in New York, London, India and the west coast, among other places. They are very excited to be putting down roots in Washington.

"We fell in love with the town, with the project and with the building," Beedle said. "We've just had a daughter, so we are really, really excited to be here. The Darars and their families are settled here, so [the brewery] is very much locally owned."

The Mulberry House will make unfiltered, natural beer with a nine-tank system with locally sourced water and hops. It will house 16 boutique hotel rooms on the second and third floors. There will also be a coffee/tea shop that will bake their own pastries every morning.

The downstairs restaurant space will have room for people working to come in and spread out with free Wifi (seating capacity of 85). The kitchen will be led by Executive Chef Andrew Wigger, who is a pastry chef who has honed his craft in France and California.

The restaurant will open lunch service from 11 a.m. to 3 p.m., with the taproom room open every day at 11 a.m.

Beedle said they will be serving their own beers, as well as beers from around the world.

"For dinner, we're doing a chef's tasting menu, a special menu of six courses, an experience of ultra-fine dining," Beedle said. "The fine dining concept will source ingredients from local farms and seafood purveyors, but will also draw from classic coastal cuisines around the world, with influences from Japan, Northern Africa, Spain, Southern Italy and France. We are working with local farms and local businesses."

The dinner menu will also include entrees such as lamb, pork belly and vegetarian selections. The rest of the menu will be very casual, including burgers and sandwiches.

The rooftop lounge will not only give you a gorgeous view of the Pamlico River, but will offer cocktails and small bites such as soy mustard steak skewers and chili-marinated chicken yakitori, as well as seasonal skewers of pheasant, grouse and venison.

The Mulberry crew plans to bring in guest 'pop-up' chefs from other areas. Beedle is excited about offering delivery to the waterfront and downtown area as well.

"We will be bringing a concept where we deliver to boat docks, the parks on the waterfront and businesses downtown," he said.

Also, local artists will rotate painting a mural on the side of the building that will change frequently.

"We have very strict safety protocols with regard to COVID-19, including disposable menus, virtual menus, disinfecting vapor mechanisms for the rooms and, of course, a state-of-the-art HVAC system," Beedle said.

The Mulberry House will also be incorporating live music, and games for children. Beedle said they are elated to be investing in the town.

"We really want this to become a community hub," he said.

The Mulberry House Brewery plans to open in the fall of 2021.

This article was written by our sponsor, Washington Tourism Development Authority.