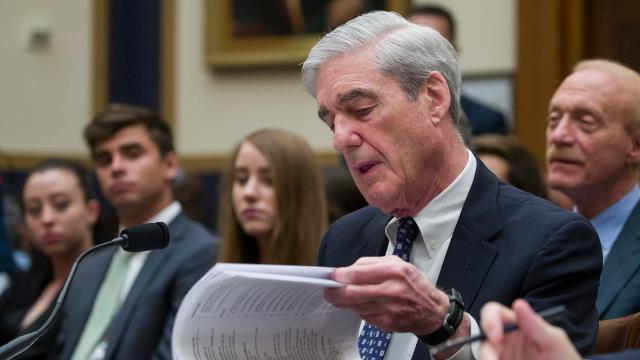 By Tara Subramaniam and Sam Fossum

CNN — Former special counsel Robert Mueller deferred or declined to answer questions from members of Congress at least 206 times during his testimony on the Hill Wednesday, according to a CNN analysis.

Of those instances, Mueller referred lawmakers to his report at least 43 times.

Specifically, he deferred or declined to answer questions from House Judiciary committee members at least 124 times, and at least 82 times from lawmakers on the House Intelligence committee.

Over the course of the morning Mueller was careful not to go beyond what was in the report and often told members that he would not or could not answer their questions. Two days prior to Mueller's testimony, the Justice Department wrote a letter which stated that his testimony "must remain within the boundaries of your public report because matters within the scope of your investigation were covered by executive privilege."

Mueller was quick to refer members of Congress to the report. Early in the morning when Georgia Republican Doug Collins probed Mueller about evidence or lack thereof regarding the President's involvement with Russian election interference, Mueller said: "I'll leave the answer to our report."

Later in the afternoon when he testified to the House Intelligence Committee, Mueller was also loathe to veer into any territory that could be viewed as speculative. He told lawmakers that he couldn't "get into" or "talk to" whether the president was credible or had ever claimed the fifth amendment. Mueller further wouldn't say if the president's tax returns or general finances were part of the his investigation.

When Rep. Ben Cline, R-Virginia, asked about the former British spy Christopher Steele and Glenn Simpson, the owner of the strategic intelligence firm Fusion GPS which published the so-called Steele Dossier, Mueller reiterated on several occasions that this was "outside my purview."

The former special counsel was also careful not to divulge or elaborate on any of the moves or decisions made by his investigators. When Rep. Tom McClintock, R-California, pressed Mueller on Paul Manafort's associate Konstantin Kilimnik, Mueller said, "I'm not going to go into the ins and outs of what we had in our investigation." He further added, "I can't go into the discussion of our investigative moves."

Although Mueller reiterated during his testimony that the report does not exonerate the President, he refused to engage with any members who probed him to speak on potential impeachment proceedings. Near the end of the House Judiciary hearing Rep. Veronica Escobar, D-Texas, quoted from the report that Mueller did not want to "potentially preempt constitutional processes for addressing presidential misconduct," and asked him to explain what he meant in simpler terms.