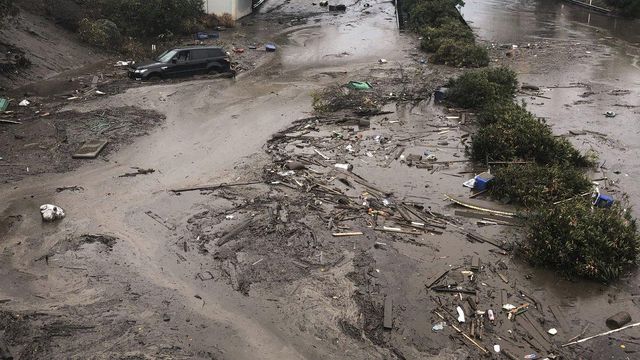 Heavy rains lashed the hillsides of Santa Barbara County on Tuesday, sending one boy hurtling hundreds of yards in a torrent of mud before he was rescued from under a freeway overpass. His father, though, was still missing. A 14-year-old girl was buried under a mountain of mud and debris from a collapsed home before being pulled to safety by rescuers as helicopters circulated overhead, searching for more victims.

Still, those children could count themselves among the lucky.

At least 13 people — and possibly more, the authorities warned — were killed Tuesday and more than two dozen were injured as a vast area northwest of Los Angeles, recently scorched in the state’s largest wildfire on record, became the scene of another disaster, as a driving rainstorm, the heaviest in nearly a year, triggered floods and mudslides.

The wreckage of the downpour, coming so soon after the wildfires, was not a coincidence but a direct result of the charred lands, left vulnerable to quickly forming mudslides.

For residents and emergency workers, still weighing the devastation of the fires, it was a day of grim rituals resumed: road closings, thousands of evacuations, downed power lines, heroic rescues and a search for the dead.

“There’s still lots of areas that we haven’t been able to get to due to debris blocking roadways,” said Mike Eliason, a public information officer for the Santa Barbara County Fire Department.

By fire or rain, natural disasters have brought death and destruction to California’s coasts, and further inland, in recent months, adding to the growing catalog of natural catastrophes in the United States that was punctuated by three devastating hurricanes, Harvey, Irma and Maria. Last year, extreme weather that scientists say is partly attributed to climate change caused more than $306 billion in damage, a record that surpassed even the $215 billion cost of natural disasters in 2005, when Hurricane Katrina battered New Orleans, according to the National Oceanic and Atmospheric Administration.

And that figure was compiled before the heavy rains struck California this week. Fires have been a scourge of California — dozens of people were killed in wildfires in Northern California in the fall — but rains bring their own perils, especially in places where the earth has been scorched by fire, leaving it susceptible to floods and dangerous mudslides.

Hundreds of emergency workers, many of whom had weeks earlier battled the massive fire that denuded hillsides and made the dirt so unstable, searched Tuesday for survivors with the help of Coast Guard helicopters and heavy equipment to clear blocked roads. And flooding and mudslides closed a stretch of Highway 101, a crucial artery along the coast south from Santa Barbara, as well as portions of the 110 freeway.

Late Tuesday, officials said they expected Highway 101 to be closed at least until Thursday.

As the mud rushed into lower-lying neighborhoods in Montecito, a wealthy hillside community where many celebrities have homes, the power went out and gas lines were severed, said Thomas Tighe, a resident. Officials said Tuesday night that it could be several days before gas service would be restored. They also said power failures were affecting more than 6,000 homes and businesses in the area, adding that many parts of Montecito were without drinkable water.

Sometime after 2 a.m. Tighe heard a loud rumbling, which he took to be boulders crashing down the hills. In the dark of the night, he could make out his cars floating away. Wearing a wet suit and booties, he used an ax to break down the fences around his house, which had been holding back the mud.

By dawn the devastation — and human toll — became clearer. Just 50 feet from Tighe’s home, firefighters found a body, wedged up against a neighbor’s car. Down the street, a couple and their three children, including an infant, sought safety on their roof.

“The neighborhood got pummeled,” Tighe said. “We were lucky in the scope of things.”

Anticipating the floods, Santa Barbara County officials issued a mandatory evacuation order on Sunday evening for roughly 7,000 residents, but most chose to stay in their homes.

“We went door to door,” said Gina DePinto, the communications manager for Santa Barbara County. “But many refused to leave.”

Across Santa Barbara and Ventura counties, even in areas spared the worse of the floods, people were once again weighing the attractions of California life against its dangers.

For the second time in a month, Mark Carrillo, who lives in the coastal community of Carpinteria, ignored orders to evacuate his home at the top of a hill. During the fires last month, he decided to stay put to make sure no embers landed on his roof.

“There’s no place I’d rather be in the world,” he said. Eliason, the fire department spokesman, said he worked with a team of firefighters that rescued eight people, including the 14-year-old girl who was in a house that was forced off its foundation and crashed into a stand of trees. It took two hours for firefighters to cut her out of the debris.

Creeks that during much of the year would only have a trickle of water burst their banks and “went where they wanted to go,” Eliason said.

“It was waist deep in the worst kind of mud you can think of,” he said. “You sink when you walk into it. You can’t pull your legs out.”

The rains began several hours after midnight Tuesday and in some cases fell an inch per hour; by late afternoon the highest recordings of total rainfall were in a section of Ventura County, where more than 5 inches had fallen in Ortega Hill. Over the weekend, as forecasts began calling for rain, the authorities began warning of possibly dangerous floods and mudslides in the area that had been consumed by wildfires in what was known as the Thomas Fire, which burned over 280,000 acres last month spanning Santa Barbara and Ventura counties, and became California’s largest wildfire on record.

As rescuers searched for survivors Tuesday afternoon, the weather forecast, at least, offered a respite. According to the National Weather Service, the rains would taper off by nighttime, and the rest of the week was forecast to be dry and clear. Jonathan W. Godt, who coordinates the landslide hazards program at the U.S. Geological Survey, said the area of the Thomas Fire was prone to debris flows for two reasons: the terrain and the nature of the fire.

The fire, in a mostly chaparral landscape, also burned exceptionally hot, Godt said. A fire changes the physical properties of the soil, making it less absorbent. “It becomes much more erodible,” he said.

As rainwater runs off and flows downhill, it picks up soil, trees, boulders and other debris and eventually collects in a stream channel. The mix of water and debris, often with a consistency close to wet concrete, can then continue traveling at high speed down the streambed.

“You bring that down at 20 miles per hour and it can do a lot of damage,” Godt said.