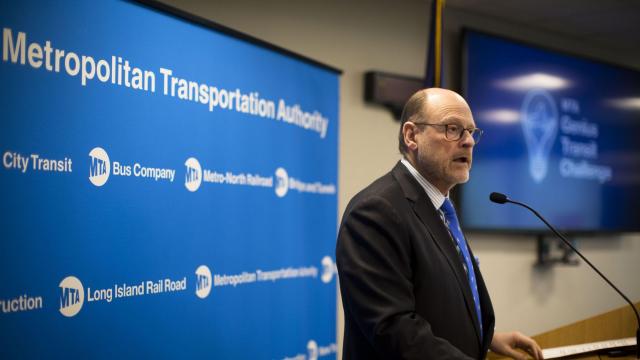 NEW YORK — As New York City continues to grapple with a subway crisis, Gov. Andrew Cuomo must now look for a new leader to turn around the system.

Three days after Cuomo was elected to a third term, he announced that the chairman of the Metropolitan Transportation Authority was stepping down. The chairman, Joseph Lhota, had returned to the agency just last year to help improve the subway amid rising delays and a series of derailments.

Subway officials have poured hundreds of millions of dollars into emergency repairs, and there are some signs of improvement. But the subway is still regularly upended by disruptions, and service is far from reliable.

Now the governor is confronting a much broader challenge to transform the system and modernize its aging infrastructure — an enormous undertaking that could cost more than $40 billion. For Cuomo, who is often mentioned as a possible presidential candidate in 2020, the ability to deliver better service will be a major test of his leadership.

“The chairman’s job is important, but the person who will really determine the future of public transit was just re-elected on Tuesday,” said John Raskin, executive director of the Riders Alliance, an advocacy group. He called on Cuomo to secure new funding during the next legislative session.

Cuomo, a Democrat who faced a torrent of criticism over his management of the subway as he ran for re-election, named Lhota to run the authority last June. Lhota had previously run the agency and won praise for helping the subway rebound after it was ravaged by Hurricane Sandy.

But during his second stint as chairman, Lhota repeatedly faced questions over potential conflicts of interest and outside jobs, including in an investigation this year by The New York Times. Lhota kept his job at NYU Langone Health and joined the board of Madison Square Garden, which is involved in negotiations with the MTA about the future of Pennsylvania Station, which sits below the arena.

The news of Lhota’s departure came as a surprise because Lhota told reporters last month that he had not considered resigning. Asked how much longer he would stay at the authority, Lhota said: “My term ends on June 10, 2021.”

Cuomo thanked Lhota on Friday and said he had been the “right person for the job.”

“He stabilized the subway system, appointed a new leadership structure to completely overhaul the MTA, and led with a steady hand during some of the agency’s most challenging moments,” Cuomo said in a statement.

The authority’s vice chairman, Fernando Ferrer, will serve as acting chairman until Cuomo names a replacement. The state Senate, which will return to Albany in January, must confirm his pick.

After Democrats won the state Senate this week, the party controls both legislative branches. They are expected to consider subway funding during the next session. The subway’s leader, Andy Byford, has proposed a sweeping overhaul that could cost $40 billion over 10 years. Congestion pricing is unlikely to cover the full cost of the plan, and other sources might be needed.

Lhota served as an intermediary between Cuomo, a hard-charging leader who has taken a hands-on role at the agency, and Byford, who became president of New York City Transit in January after working at systems in Toronto and London. Lhota was also key in pressing Cuomo to support congestion pricing, even though it carried political risks, according to an official at the authority, who spoke on the condition of anonymity because he was not authorized to discuss the issue publicly.

Now Byford could be on his own, without someone to help him navigate the prickly task of working with Cuomo. Still, there are other leaders, including Veronique Hakim, the authority’s managing director, and Patrick Foye, its president. Hakim and Foye were interviewed for the MTA chair job last year before Lhota’s return was announced. Hakim, the former head of New Jersey Transit, would have been the first woman to serve in the chair position.

Lhota did not respond to requests for comment about why he was leaving. In a statement, Lhota said that he had returned to the agency to halt the decline in service and argued that it had improved, pointing to a drop in train delays.

“There is still a long way to go to achieve the performance that New Yorkers demand and deserve,” Lhota said in a statement. The last MTA chairman, Thomas Prendergast, stepped down in January 2017, shortly after the opening of the Second Avenue subway on Manhattan’s Upper East Side. Prendergast, a highly respected executive who was named to the post in 2013, served longer than other recent leaders.

Over the years, some MTA leaders have been a forceful voice for subway riders. Richard Ravitch, an MTA chairman who is credited with turning the subway around in the 1980s, was outspoken in calling on officials to help him fix the system. Ravitch said the agency needed a leader like that now.

“The MTA needs an independent person who will view the challenge as being exclusively to make this transportation system function in a safe and orderly way,” Ravitch said, “and someone who will petition the governmental authorities — city, state and federal — and the business community for the resources necessary to restore this system to a state of good repair.”

Reinvent Albany, a government watchdog group, said Lhota’s outside jobs had hurt the authority’s credibility. His resignation “gives New York state government an opportunity to bring the MTA’s governance back under the rule of law and to stop accepting blatant conflicts of interest by the head of the MTA or other state authorities,” the group said.

Jon Weinstein, a spokesman for the MTA, said the group was wrong about the law. “Joe Lhota conducted himself in accordance with the highest ethical standards,” Weinstein said.

De Blasio, a Democrat who has quarreled with Cuomo over who was responsible for fixing the subway, said Albany must approve new funding.

“There’s clearly a lot of other leaders at the MTA who can carry forward the work,” de Blasio said in a radio interview Friday. “But no one is going to be able to get the work done of fixing our subways and buses if we don’t have a permanent funding source.” Lhota, who previously resigned as chairman in 2012 to run for mayor against de Blasio, seemed to have more fun during his first stint. He created an uproar when he said that subway trains should not stop for kittens on the tracks. He posted amusing thoughts on Twitter, including his distaste for “Jersey Shore” and the time he sipped “too much wine.” This time around, he mostly stayed off Twitter.

“While we still have much further to go,” he said, “Chairman Lhota leaves the authority in a better position than when he joined.”