Move over, kale: Mushrooms are the new grocery aisle celebrities 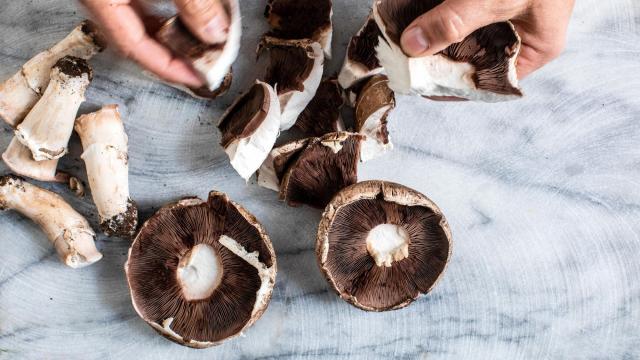 CNN — Move over, kale. There's a new celebrity in the produce aisle: mushrooms.

People are scooping up mushrooms so quickly that producers are scrambling to keep pace with burgeoning demand.

"We haven't run out as yet, but we're definitely trying hard to keep up," said Gale Ferranto, who helps run her family's third-generation business, Bella Mushroom Farms, in Chester County, Pennsylvania.

Chester County, about a two-hour drive southwest from New York City, is the epicenter of mushroom production in the United States.

"We call it the Mushroom Mecca," said Ferranto. The area accounts for more than 60% of all domestic mushroom production coming from more than 50 local family-owned farms.

"It's not going to be easy, but we are upping our game to grow more mushroom crops a year from now," she said.

Monthly US mushroom production has surged to an all-time high, according to industry trade group American Mushroom Institute.

Store prices for mushrooms have also ticked up. The average selling price for a pound of fresh mushrooms increased to $4.19 in December 2019, up from $4.03 from a year ago, according to market research firm IRI.

"The push by consumers to eat healthier by pivoting to plant-based foods is a big part of mushroom's popularity," said Lori Harrison, spokeswoman for the American Mushroom Institute.

Plant-based diets are in vogue, fueling demand for meat alternative items like the Impossible Burger and innovations such as cauliflower rice and cauliflower bread.

"Growing recognition of the health and nutritional value of mushrooms along with their year-long availability and culinary versatility have contributed to increased customer demand," Walmart, the nation's largest grocer, said in a statement to CNN Business.

Mushrooms are packed with vitamins and minerals.

"They are fat-free, low calorie, low sodium, gluten free," said Harrison. "They are versatile, you can eat them cooked or raw, and they fit any healthy eating plan you have for breakfast, lunch or dinner."

Although button mushrooms remain the most commonly consumed variety, Harrison said demand is picking up for specialty varieties, such as shiitake, crimini and oyster mushrooms.

Albertsons said shoppers seem to be doing just that.

"What we're seeing with mushrooms is customers buying more mushroom varieties, beyond the traditional white and brown mushrooms," said Christine Wilcox, spokeswoman for the supermarket chain.

Then there are some unconventional products with mushrooms as an ingredient: There's mushroom tea, mushroom jerky and "shroom" crackers. Meanwhile, the mushroom "blended" burger continues to pop up on menus nationwide.

Some grocery stores are keeping up with demand by growing mushrooms on site.

The average unit is six feet tall, four feet wide and three feet deep but the setup can be configured in different ways. Each unit can produce 40 to 60 pounds of mushrooms a week.

"We've built the company around the growing demand for mushrooms," said DeMartino.

The automated units are designed to grow organic specialty mushrooms like pink and blue oyster mushrooms and shiitake mushrooms in a highly-controlled and monitored environment.

"Part of the appeal of these units is that mushrooms are delicate in nature. When you cram them into boxes for shipping, it affects their quality," said DeMartino. "Our idea was to keep them as fresh as possible by growing them right where people are buying them or eating them."

The company has already installed 10 units. Two of them are in Whole Foods stores, one in Brooklyn and the other in New Jersey. "We're getting calls every week from various parts of the country about our units," said Carter.

He thought the portable minifarm was a unique way to meet real-time customer demand for specialty mushrooms.

"We installed the first one in our store in New Jersey in early 2019 and it's been received really well," he said. Smallhold manages the machines, grows and harvests the mushrooms and sells them to Whole Foods to then sell to its customers.

Manca expects the grocery chain could be adding more Smallhold units in the coming year to other locations. "This is as fresh as it gets, and the units are very cool to look at too for our shoppers," he said.

Why millennials are warming up to mushrooms

The mushroom's Earth-friendly nature is scoring points with Millennial consumers because the produce could almost be the poster child for sustainability.

Mushrooms are grown indoors, using byproduct from other farms.

"It's trash that would otherwise have ended up in landfills, like straw and bedding from horse farms, cocoa shells from a Hershey's plant and chicken litter from a poultry house," said Harrison.

The byproduct is used to create compost. Beds of compost have spawn planted in them. Within 10 to 14 days, mushrooms grow and are ready to be hand harvested. Mushroom farming typically results in high yield from a very small footprint.

The same compost bed can then be used for two to three production cycles. The used compost itself has alternative uses, including in green roofs, landscaping and home gardening.