Mourning Erica Garner: ‘When Her Father Died, an Activist Was Born’ 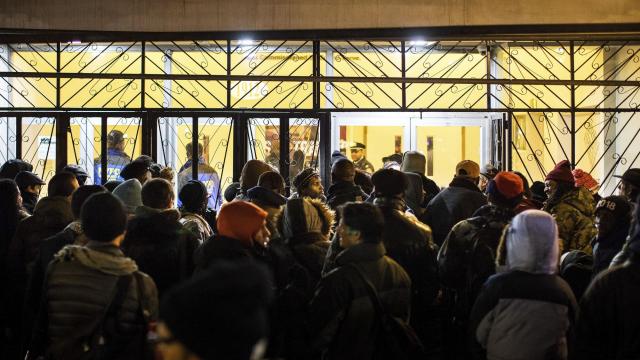 NEW YORK — The word “warrior,” or some variation on that theme, was used over and over again Monday at the funeral service for Erica Garner.

Garner, who was 27 when she died on Dec. 30, built a reputation as a relentless fighter when she started a campaign against police brutality that gained nationwide attention after the death of her father, Eric Garner, in July 2014. Eric Garner, who suffered from asthma, was killed when a New York City police officer, Daniel Pantaleo, placed him in a prohibited chokehold after a confrontation on Staten Island.

Garner had been accused of selling loose cigarettes. His death was ruled a homicide by the New York City medical examiner’s office.

His dying words, “I can’t breathe,” repeated 11 times and captured on video, ignited a national conversation about police brutality and became the national rallying cry for a movement demanding a fundamental shift in how the police deploy deadly force in minority communities. It also led to his daughter’s activism.

In a sign of the widespread effect Erica Garner had in her relatively short time in the public eye, Sen. Bernie Sanders sent a statement of praise to be read at her funeral, which was attended by hundreds of people, including rapper and actor Common as well as several New York City elected officials.

“This was a real warrior; she didn’t care about awards and press,” said the Rev. Al Sharpton, head of the National Action Network, who delivered the eulogy at First Corinthian Baptist Church in Harlem. “She cared about justice.”

Garner died nine days earlier at Woodhull Medical and Mental Health Center in Brooklyn after suffering a heart attack brought about by an asthma attack. She left behind two children, a 4-month-old son, whom she named after her father, and an 8-year-old daughter.

The service was not without controversy. Gwen Carr, Eric Garner’s mother and Erica Garner’s grandmother, was turned away from the church. Afterward, Sharpton said the commotion, including a person who burst into the church yelling during the middle of the service, was part of a “family friction” that should not distract from Erica Garner’s work.

“I hope we can heal whatever the family friction is and keep fighting for justice,” Sharpton said after the service.

It was the difficulty of that work — and the fact that it was based on the death of her father — that quite likely took a toll on Erica Garner, Sharpton said.

“Her heart was attacked in 2014 when her daddy was choked and begged 11 times for his life and they would never let the grip go,” Sharpton said. “When she saw the tape of her father, that’s when her heart was broken. Whatever attack came came to the pieces that were left.”

The physiological and psychological effects of battling injustice and racism have become a part of the conversation around Erica Garner’s death, especially given her recent interview with Benjamin Dixon, host of the podcast “Like It or Not,” during which she said that she was “struggling” with stress and that the “system beats you down to where you can’t win.”

Continuing in the animated tone that was the hallmark of her activism, Garner described seeing the video of her father’s death.

“I felt the same pain that my father felt on that day when he was screaming, ‘I can’t breathe,’” she said. “When he was saying that he was tired of being harassed.”

Garner’s strongest legacy “is turning her pain into power,” Sharpton said before the service. “When her father died, an activist was born. You don’t just accept injustice, you fight.”

Garner went about that fight in her own manner, her family and fellow activists said. She was unafraid to speak her mind, use rough language to make a point, or go against the grain.

“She would question every strategy,” Sharpton said. “Why this tactic, or why that tactic, or, ‘Rev. Al, I disagree with this and I will try it this way.’”

While her grandmother, Carr, supported Hillary Clinton in the 2016 Democratic presidential primary, Garner endorsed Sanders, appearing in a campaign ad, saying: “People are dying. We need a president that will talk about it.”

In his statement, Sanders praised Garner.

“Getting to know Erica was one of the great honors of my campaign. Erica never asked to be an activist, but responded to her own personal tragedy by becoming a fierce fighter for criminal justice reform and an end to police brutality,” Sanders said in the statement, which Sharpton read.

Common said he took a cross-country flight to be at the service. Others in attendance included city Comptroller Scott M. Stringer, Public Advocate Letitia A. James and council Speaker Corey Johnson. Michael Brown Sr., the father of Michael Brown, a teenager who was shot and killed by the police in Ferguson, Missouri, in 2014, was also there.

Outside the ceremony, where several mourners stood in the cold, some said they were sorry to hear about the family dispute but were more interested in continuing Garner’s fight, which they saw as unresolved.

The U.S. Justice Department has yet to decide whether it will bring civil rights charges in Eric Garner’s death, and the New York Police Department will not hold an administrative trial until that decision is made. A Staten Island grand jury declined to indict Pantaleo in 2014.

“I saw her as a revolutionary,” said Theodora X. Turner-Kenney, 66, a retired medical clerk who attended the funeral. “She fought because no one has been held accountable for her father’s death.”