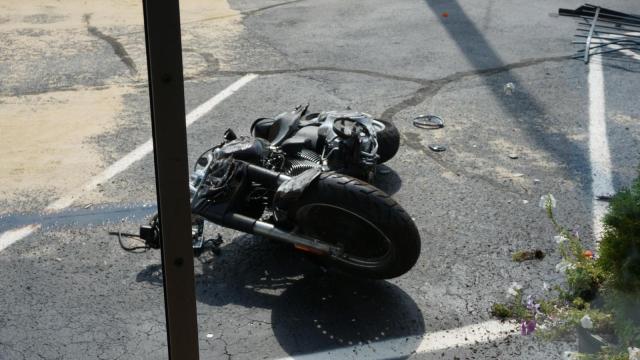 The wreck happened at about 9:45 a.m. when a motorcycle ran off the road and crashed into Flooring America, at 402 Hope Mills Road. The driver of the motorcycle, Justin Mackerricher Roberts, 29, of the 3600 block of Hanover Drive in Hope Mills, was taken to Cape Fear Valley Medical Center, where he later died.

"(The motorcyclist) lost control, from what I've gathered from eyewitness accounts, left the roadway to the left, traveled through several parking lots, struck a wrought iron fence between the two businesses and then struck the building after he struck the wrought iron fence," Fayetteville police Capt. Jay Devon said.

All lanes of Hope Mills Road between Sequoia and Walnut Drive roads remained closed after 11 a.m. Drivers should use alternate routes.

Officers with the Fayetteville Police Department are investigating the cause of the wreck. Anyone with information about the incident should call 910-433-1830.