Lumberton, N.C. — The Lumberton community joined in prayer Wednesday night as the search continues for a kidnapped 13-year-old girl.

Hania Noelia Aguilar, an eighth grader at Lumberton Junior High School, was snatched Monday by a man dressed in black and wearing a yellow bandana while she was standing outside her family's home in the Rosewood Mobile Home Park located at 3525 E. Elizabethtown Road. 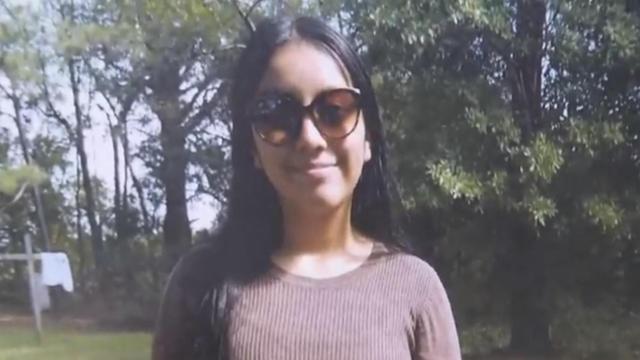 Circled in strength and surrounded by the Lumberton community, Hania’s mother begged her daughter’s kidnapper to bring her home.

"We're waiting for you. Your desk will be there when you get back," one teacher said.

Police say a man forced the girl into her family's green 2002 Ford Expedition, which is registered to Velasquez Hernandez, Hania's aunt, of Summerville, S.C. The SUV, which has South Carolina license plate NWS-984, was seen leaving the mobile home community Monday morning.

Authorities on Wednesday said that surveillance cameras captured photos and video of the stolen SUV, which has peeling paint on the hood and a Clemson sticker on the rear window.

Hania had started the vehicle against her aunt's wishes on Monday, the girl's sister told WRAL News. Witnesses saw the SUV leaving the mobile home community Monday morning after Hania was snatched in the vehicle while screaming for help.

According to the FBI, the 911 call to report Hania’s abduction was made by a neighbor when a relative ran over to get help. Robeson County 911 workers received the call at 6:54 a.m. Monday.

Police are pleading with the community to share any video or surveillance images they may have. Until those tips come in Lumberton will be on its knees in prayer.

The FBI announced Tuesday that the agency is offering a reward of up to $15,000 for information that helps locate Hania. A special tip line has been set up to handle the case.

Hania is 5 feet tall and weighs 126 pounds, according to authorities.

She has black hair and brown eyes and was last seen wearing a blue shirt with flowers and blue jeans.