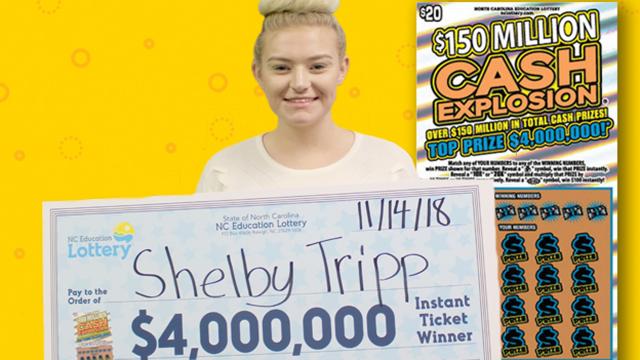 Greenville, N.C. — You’re never too old to listen to your mom.

Shelby Tripp of the Stokes community near Greenville said she learned that lesson after her mother’s intuition led her to a $4 million lottery prize.

On Halloween, Tripp’s mother won $500 on a lottery ticket and immediately called her daughter to share the good news.

"She said she had a lucky feeling and I needed to buy a lottery ticket," Tripp said. "I don’t always listen to her, but this time I did."

Tripp said she stopped by a Speedway on South Memorial Drive in Greenville and bought a $150 Million Cash Explosion scratch-off ticket.

"I didn’t even scratch the ticket until I was ready to go to bed," she said. "I put it on the kitchen counter, cleaned up the house and did some other chores."

At first, Tripp said she didn’t think she won anything, but she kept scratching.

"When I saw the $4 million, I couldn’t believe it," she said. "I had my mom come over to see if I was reading it right. When she said I was, I ran around the house, pacing and screaming for at least 30 minutes."

Tripp claimed the prize Wednesday at lottery headquarters in Raleigh. She chose a lump sum of $2.4 million rather than a $4 million annuity that has 20 payments of $200,000 a year.

After required state and federal tax withholdings, she took home $1,692,030, and she said she plans to use some of the money to redecorate her mother’s house.

"She’s worked so hard her whole life," Tripp said. "I just want to do something nice for her. I’ll pay off her house and then make sure she has her house redecorated the way she’s always dreamed."