Most Sunscreens Can Harm Coral Reefs. What Should Travelers Do? 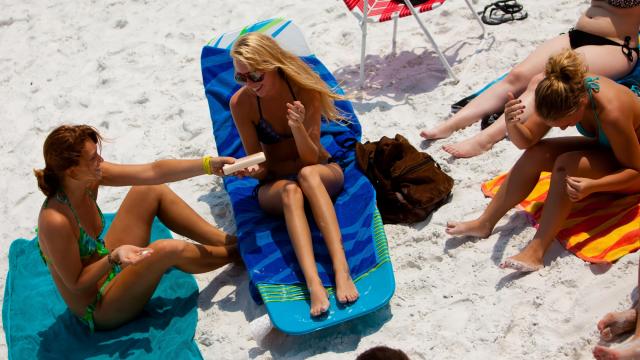 The coral reefs around the Turks and Caicos Islands are a major tourist attraction, and Mark Parrish is trying to make sure the visitors he takes there do not kill them with cosmetics.

He co-owns Big Blue Unlimited, a tour operation that guides snorkeling, kayaking and other adventurous excursions around the islands. The company’s website states that it will only allow the use of 100 percent biodegradable sunscreen on all of its trips.

“We make it mandatory, which is easier said than done,” Parrish said. “The key is telling people well in advance, putting it on the website and saying this is our policy and giving them a chance to shop at home.”

After decades of learning that sunblock is vital to a healthy beach vacation, consumers may wonder what’s wrong with their brand.

But recent studies that link the active ingredients in protecting skin from damaging ultraviolet rays to coral bleaching has led to a global push for more reef-safe sunscreens.

Chemicals in sunscreen that come off while swimming or travel through sewage systems when washed off in the shower are “bigger than climate change,” in causing coral reef damage, said Craig Downs, executive director of the Virginia-based Haereticus Environmental Laboratory, which has studied the effects of sunscreen on coral reefs.

In 2015, Downs led a team that reported that oxybenzone, a common chemical found in sunscreens, is toxic to the symbiotic algae that live within corals, which provides their color and performs other vital duties, and also stunts the growth of corals.

A 2008 European study published by Environmental Health Perspectives concluded that sunscreen promotes viral infection in corals that can lead to bleaching. They estimated that up to 14,000 tons of sunscreen is deposited in the world’s oceans each year.

While environmental groups continue to push for legislation, the travel industry, both in Hawaii and beyond, has responded with campaigns designed to educate travelers on how to protect themselves from sunburn without contributing chemicals to the reefs.

Aqua-Aston Hospitality, which manages more than 40 resorts in the Hawaiian Islands, distributes information on oxybenzone and its role in coral bleaching as guests check in along with a sample of chemical-free sunscreen from Raw Elements considered “reef-safe.” It also stocks free sunscreen dispensers with the biodegradable lotion.

The campaign began last April at 16 island locations and is being expanded to all of the company’s resorts, including those in Florida; Lake Tahoe, California; and Costa Rica this year.

In March, the company will distribute complimentary kits including a bottle of the sunscreen to guests who book using the promo code ALIST.

In Mexico, areas popular with snorkelers such as Xel-Há on the Rivera Maya and Chankanaab Beach Adventure Park in Cozumel ban the use of nonbiodegradable sunscreen. At Xel-Há, visitors with unapproved sunscreen can swap their brands for samples of safe products and get their own back when they exit the park.

Checking the effects of sunscreen on the environment requires getting familiar with chemicals including oxybenzone, octinoxate and methylparaben. Haereticus Environmental Lab publishes a list of chemicals to avoid.

Researchers agree that sunscreen isn’t the only culprit in coral bleaching, pointing to rising sea temperatures caused by global warming among other threats. But it may be the one travelers have the most immediate and direct influence over.

“This is one impact that we can control,” said R. Scott Winters, chief executive officer of the Coral Restoration Foundation, a nonprofit conservation organization based in Tavernier, Florida. “If we are to be successful in bringing coral reefs back to a healthy state, it is incredibly important that people visiting them choose sunscreens that do not contain oxybenzone. More important, choosing to cover up with UV protective clothing, rash guards, and hats can also reduce the amount of sunscreen needed.”