Raleigh, N.C. — The majority of speakers at a Wednesday afternoon public hearing on North Carolina Confederate monuments were against moving statues off the State Capitol grounds.

About 60 people spoke, much fewer than expected by the study committee considering this issue for the state Historical Commission. In fact, a hearing slated for two hours, with a third hour optional, basically wrapped up after one. Committee members sat around for an hour waiting to see if anyone else would show up to speak before the hearing's advertised 3:30 p.m. end.

Chairman David Ruffin said the group hopes to make a recommendation to the Historical Commission by mid-May, but first it plans to take a closer look at legal opinions and input from various experts about exactly what it can do on Confederate monuments under state law. 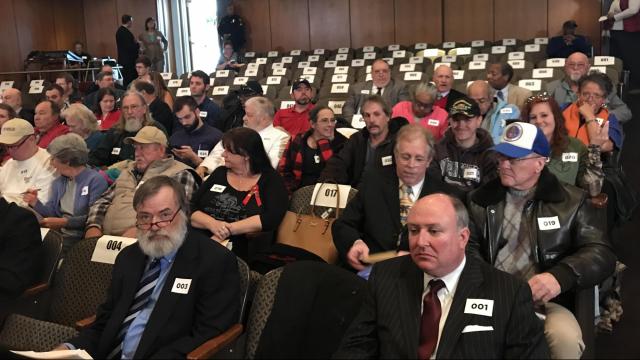 Gov. Roy Cooper wants to move three monuments from outside the Capitol building to the Battle of Bentonville site in Johnston County. The General Assembly's Republican majority passed legislation in 2015 that says the Historical Commission has to approve such moves, but that law also says monuments can be moved only when required to preserve them or when removal is needed to make room for construction.

A number of speakers Wednesday said the law is clear: The monuments can't be moved to Bentonville, in part because the law also requires monuments to be relocated "to a site of similar prominence, honor, visibility, availability, and access."

WRAL News streamed the hearing and produced a live blog of many of the comments. That rundown is below, in reverse chronological order.

2:38 p.m.: Everyone who signed up to speak has spoken, but because this hearing was scheduled to continue until 3:30 p.m. the study committee will remain in case others arrive to speak.

2:34 p.m.: Several speakers in a row now calling for the monuments to move.

One man said the timing of their placement was key – long after the war was over and during the Jim Crowe era.

"I think it is hard to ignore their racist past," he said.

"These monuments are a mask," one woman said. "They are a whitewash over my ancestors' cowardice or inhumanity."

"When I walk past the monuments, they turn my stomach," another woman said. "There should be no monuments for traitors."

And one man noted that the Confederate flag had become a symbol for neo-Nazis and the KKK.

"Until (those who want the monuments to remain) take their heritage back, I don' think they have much to say," he said.

2:30 p.m.: Another speaker concerned about leftists who are engaged in "a concerted effort ... throughout this country, throughout this state, to eradicate our history."

We fought the war "for Southern independence ... against an overbearing government," Rusty Alphin said. "We're fighting that war again today."

2:23 p.m.: James Smithson says racism exists, but it's as unconnected to these monuments as slavery was to the soldiers who fought for the Confederacy.

As he said this, a pair of black women in the audience snickered a bit, looked at each other and shook their heads.

2:20 p.m.: Gary Williamson said, "Those memorials ... are more than just concrete blocks and whatnot. They are basically a grave for the men that never came back. ... Those monuments mean everything to me. ... We will fight till hell freezes over, and then we'll fight on ice."

2:17 p.m.: Ron King said, "We can all agree slavery was wrong, but our ancestors stood up to tyrannical federal government. They should be honored for that, not vilified."

2:09 p.m.: By far, the majority of speakers so far have been in favor of keeping the monuments in place.

Charles Lane of Raleigh would like to see them moved, though.

"We, as North Carolinians, must address the implications of our history," he said. "It is arrogant of us to honor a rebellion with the tallest statue on the Capitol grounds."

Lane was followed by Mark Sweat, who criticized the "criminal leftists and the shreds of human debris that follow them" who want these monuments moved. He called Cooper "the Neville Chamberlain of our time." Chamberlain was the British prime minister who sought to keep Great Britain out of World War II by appeasing Adolf Hitler.

1:56 p.m.: I believe we've had our first speaker in favor of moving the monuments, though he did not say so specifically. Steven Shepherd said he is a veteran and that he is "absolutely appalled" by what he's seen in "a state where we have always looked out for each other."

He was followed by Dennis Johnson, who introduced himself as, "just a regular redneck from Johnston County." He is against moving the monuments.

"I can't believe we've got a governor that would even consider that," he said.

1:52 p.m.: Summary of points made by the first 10 speakers: They're all against moving the monuments, which are important to people learning and remembering history. Agreement as well that the law does not allow the monuments to be moved. Several of the speakers are connected to the Sons of Confederate Veterans. One man said that, not only should the monuments remain, more should be added.

1:47 p.m.: Boyd Cathey said moving the monuments to a less prominent location "threatens the memory of our past and facilitates the process of forgetting."

1:45 p.m.: Boyd Sturges, an attorney for the state division of the Sons of Confederate Veterans is the first speaker. "The law clearly protects these statues. I have filed a detailed legal brief supporting this position. ... You don't have to like a law to follow a law. Otherwise, you have anarchy and mob rule," he said.

1:42 p.m.: Committee Chairman David Ruffin has read the ground rules for the public hearing, and a dozen or so more people are filing in and sitting down.

Ruffin also spoke briefly about the committee's next step. It's essentially to think about whether to move the three monuments at issue and to consider legal advice about just what power the state Historical Commission, which this study committee is attached to, has. State legislators passed a law in 2015 to protect Confederate and other monuments from removal, and there's some question whether the commission is empowered to order removal.

The first speakers are lining up, and the hearing will get rolling in a moment.

1:30 p.m.: The meeting is getting underway, and the room is less than half full, partly because a large section reserved for the press has only about a dozen journalists or state staffers sitting in it.

Seats reserved for speakers are about half full, with about 55 people signed up to speak. Attendance is far below the commission's meeting on the issue last fall, during which committee members decided to delay any decision on Confederate monuments on the Capitol grounds until this year.

That meeting drew a packed house and protests outside. None of that is in evidence now.