This year saw the most people in immigration detention since 2001 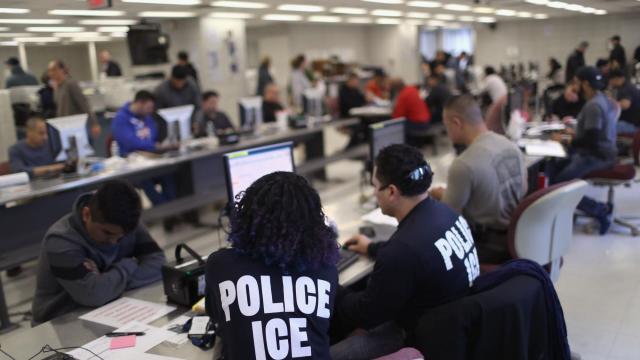 (CNN) — Immigration authorities have detained a record number of undocumented immigrants this past year, according to data obtained from Immigration and Customs Enforcement.

ICE held an average of more than 42,000 people in custody each day throughout fiscal year 2018. The previous record high since ICE began tracking the data in 2001 was just over 38,000 last year.

Over the past year, the monthly average numbers fluctuated between a low of 39,192 last October and a high of 44,699 in June.

The agency did not provide a monthly average for October 2018, the first month of the new fiscal year.

ICE, which was not formally created until 2003, provided data on detentions back to 2001 when the US Immigration and Naturalization Service handled immigration detentions. INS was dissolved in 2003 in the government restructuring that created ICE.

Since taking office, President Donald Trump has made immigration enforcement one of his top priorities -- most recently sending thousands of active duty military troops to the US-Mexico border and issuing a proclamation to ban migrants who cross the border illegally from seeking asylum.

He has lavished praise on ICE earlier this year when calls to abolish the agency reached a fever pitch, tweeting that the "brave men and women of ICE" were doing a "fantastic job."

However, immigration advocates and some liberal politicians have accused ICE of acting as a rogue agency and terrorizing the immigrant community.

Earlier this fall, the agency drew the ire of congressional Democrats after the Department of Homeland Security redirected $200 million from all over the department to fund detention and deportations, including shifting $10 million from FEMA's operating budget.

Based on available information, the past year's annual average daily detainee population exceeds the 40,520 congressionally funded beds available to ICE. However, ICE has the ability to go above that number, and often does, using existing funds and agreements.

The lowest annual number of detainees was in fiscal year 2005 with an average population of 19,718. At that time, ICE had 18,500 funded beds available.

"Ensuring there are sufficient beds available to meet the current demand for detention space is crucial to the success of ICE's overall mission," ICE spokesperson Dani Bennett said in a statement to CNN. "Accordingly, the agency is continually reviewing its detention requirements and exploring options that will afford ICE the operational flexibility needed to house the full range of detainees in the agency's custody."

The administration has asked for nearly $2.8 billion to expand detention capacity for an average of 49,000 adults and 2,500 families, Bennett said.

CLARIFICATION: This story has been updated to clarify that ICE was created in 2003 but provided data on detentions back to 2001.