A Dire Need in Addiction Medicine 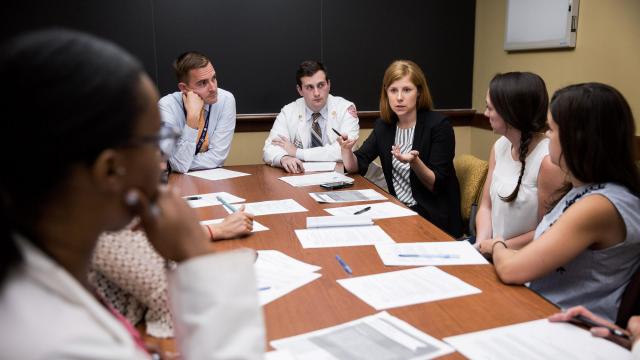 BOSTON — To the medical students, the patient was a conundrum.

According to his chart, he had residual pain from a leg injury suffered while working on a train track. Now he wanted an opioid stronger than the Percocet he had been prescribed. So why did his urine test positive for two other drugs — cocaine and hydromorphone, a powerful opioid that doctors had not ordered?

It was up to Clark Yin, 29, to figure out what was really going on with Chris McQ, 58 — as seven other third-year medical students and two instructors watched.

“How are you going to have a conversation around the patient’s positive tox screen results?” asked Dr. Lidya H. Wlasiuk, who teaches addiction awareness and interventions here at Boston University School of Medicine.

Yin threw up his hands. “I have no idea,” he admitted.

Chris McQ is a fictional case study created by Wlasiuk, brought to life for this class by Ric Mauré, a keyboard player who also works as a standardized patient — trained to represent a real patient, to help medical students practice diagnostic and communication skills. The assignment today: grappling with the delicate art and science of managing a chronic pain patient who might be tipping into a substance use disorder.

How can a doctor win over a patient who fears being judged? How to determine whether the patient’s demand for opioids is a response to dependence or pain?

Addressing these quandaries might seem fundamental in medical training — such patients appear in just about every field, from internal medicine to orthopedics to cardiology. The need for front-line intervention is dire: primary care providers like Wlasiuk, who practices family medicine in a Boston community clinic, routinely encounter these patients but often lack the expertise to prevent, diagnose and treat addiction.

According to the Centers for Disease Control and Prevention, addiction— whether to tobacco, alcohol or other drugs — is a disease that contributes to 632,000 deaths in the United States annually.

But comprehensive addiction training is rare in U.S. medical education. A report by the National Center on Addiction and Substance Abuse at Columbia University called out “the failure of the medical profession at every level — in medical school, residency training, continuing education and in practice” to adequately address addiction.

Dr. Timothy Brennan, who directs an addiction medicine fellowship at Mount Sinai, said that combating the crisis with this provider workforce is “like trying to fight World War II with only the Coast Guard.”

Now, a decadelong push by doctors, medical students and patients to legitimize addiction medicine is resulting in blips of change around the country. A handful of students has begun to specialize in the nascent field, which concentrates on prevention and treatment of addictions and the effect of addictive substances on other medical conditions. In June, the House of Representatives authorized a bill to reimburse education costs for providers who work in areas particularly afflicted by addiction.

There are only 52 addiction medicine fellowships (addiction psychiatry is a separate discipline), minuscule compared to other subspecialties. In August, the first dozen finally received gold-standard board certification status from the Accreditation Council for Graduate Medical Education (by contrast, there are at least 235 accredited programs in sports medicine).

While most medical schools now offer some education about opioids, only about 15 of 180 U.S. programs teach addiction as including alcohol, tobacco and other drugs, according to Dr. Kevin Kunz, executive vice president of the Addiction Medicine Foundation, which presses for professionalization of the subspecialty. And the content in all schools varies, he noted, ranging from one pharmacology lecture to several weeks during a third-year clinical rotation, usually in psychiatry or family medicine.

This 75-minute session to teach BU students the nuances of assessing a pain patient is already unusual. What also distinguishes it is the presence of an addiction medicine fellow, Dr. Bradley M. Buchheit of Boston Medical Center.

“What isn’t present in his tox screen?” Buchheit prompted students.

“What we’ve prescribed him — Percocet,” Buchheit told them.

“So we have to figure out where that Percocet has been going.”

— Asking About Cocaine Use

When you are a 20-something medical student, fists clenching nervously in the pockets of your white medical coat, learning to get gruff, grizzled Chris McQ to disclose uncomfortable truths is not readily gleaned from a textbook. McQ is crusty and defensive. As students resorted to the same chirpy rejoinder — “Awesome!"— he tried not to flinch. The man just wanted pain meds.

In each small-group session, a student had 15 minutes to assess McQ and make a plan. McQ once had a cocaine problem. His girlfriend was taking hydromorphone, known as Dilaudid, for back pain. Was he at risk for misusing opioids?

“Ask him about his pain first,” Wlasiuk told the students. “Language matters. Avoid saying, ‘I found this out.’ Instead, say, ‘This was in your urine screen.’ You want to keep that conversation going, not shut it down.”

The students had learned about “motivational interviewing,” a technique that encourages patients to articulate health goals. As medicine moves away from doctor-knows-best paternalism, students are being schooled in engaging the patient with a joint-decision-making, team approach.

Before McQ entered the classroom, the students debated: Was he selling Percocet to buy cocaine? Stealing his girlfriend’s Dilaudid?

Buchheit cautioned: “Substance use disorder is a chronic, relapsing disease. So is diabetes. Diabetics don’t follow a diabetic diet 100 percent of the time. If they were to have a slip-up, we would figure out what went wrong and say ‘Is there anything else we can do?’ ”

Despite the urgent need for addiction medicine education, there are considerable barriers to establishing it. Hours of training have already been meted out to conditions deemed critical. Making time in a jammed schedule can mean another subject has to be shrunk. Because addiction medicine is young, most medical schools can’t rely for expertise on fellows — postgraduate students who steep themselves in a subspecialty. Fellows would typically consult on addiction-related cases in hospitals and clinics, educate medical students and supervise residents in primary care fields where these patients first appear: family medicine, emergency medicine, obstetrics.

And so the field of addiction medicine struggles to perpetuate itself.

Dr. Daniel Alford, a professor and associate dean at Boston University, is a driving force behind its curriculum. “The biggest challenge now is how do you sustain it?” he said. “Who keeps updating it? When faculty leave, who will replace them?”

There is not much incentive to specialize in addiction medicine. According to a 2017 study, insurance disparities can be striking. Insurance views addiction treatment as an afterthought to mental health therapy, which itself trails reimbursement for physical health care.

The reasons for resisting this career are also cultural. The stigma that attaches to patients also clings to doctors who treat them. The patients are often dismissed as manipulative and incurable; caring for them is seen as a thankless endeavor.

“I really enjoy working with these patients,” Buchheit told the students. “They have often been kicked to the curb by the formal medical system. They don’t trust us. So for them to walk into a room and have a doctor say, ‘It’s great to see you, thank you for coming in,’ is very powerful. And then you can see them get better with treatment. It can be very rewarding work.” The students tried out approaches on McQ. “You called our office and wanted an early refill on your Percocet,” said one. “But it’s important that you come in. I’m glad you’re here and we can maintain our relationship.”

McQ told one student that his pain had worsened — that he ran through his prescription, tried to get more and took some of his girlfriend’s Dilaudid.

McQ suggested that the doctor switch him to Dilaudid.

“Time out!” Yin, the student, said, turning to the class.

“What are you struggling with?” Wlasiuk asked him.

Another student asked: “By increasing his dose, are you protecting him from getting the drugs off the street?”

Wlasiuk said that although medical training typically urges students to come up with absolute answers, treating these patients often means getting comfortable with ambiguity.

The students brainstormed with her and Buchheit. Some offered to raise the Percocet dose if he agreed to frequent office visits; others urged him to try physical therapy and acupuncture.

A few remembered to caution McQ about opioids. (“Percocet is an opioid?” McQ responded. “I’m not one of those people!”)

In an evenhanded tone, Chioma Anyikwa, 25, marched through McQ’s history and pain, which he had previously listed as four of 10.

“Wow, that’s pretty high,” she said. “Did you do anything else to treat it?” Hesitantly, he spoke about sharing his girlfriend’s Dilaudid.

“In your urine screen we also saw some cocaine,” she continued. “Do you know anything about that? I appreciate you being honest with me.”

McQ looked uneasy. “It’s not gonna mess me up if I tell you?”

She shook her head. “No, we just want to help you regroup and fix the problem,” she said.

He admitted that a friend had been in town and they did a few lines for old times’ sake.

— From Classroom to Clinic

Supervised by Wlasiuk, she spent a day at South Boston Community Health Center.

The first patient, Brooke Anglin, 28, had had a rough ride. During a turbulent relationship when she was sagged down by depression and severe anxiety, she soothed herself with opioids. After the birth of her second child, she lost both her job as a supermarket cake decorator and custody of her two children. Under Wlasiuk’s care, she gradually weaned herself off the opioids. As Wlasiuk looked on, Anyikwa began careful questioning. “How have things been going?” she asked the patient.

Not great, Anglin replied. Earlier that week she had been evicted.

“That’s a lot,” Anyikwa responded. “How are you coping?”

Anglin said she’d had a resurgence of anxiety.

That was enough for Wlasiuk to step in. “Is your heart racing? Are you feeling panicky?”

“Have you felt you wanted something for it from your friends?” Wlasiuk gently pressed. “What’s stopped you?”

Anglin whispered, “I want my kids back.”

Wlasiuk grasped Anglin’s hands. “I am amazed by your strength,” she said. “I want to treat your anxiety until things settle down. What are your thoughts?”

After the patient left, Wlasiuk remarked, “Primary care is the right place for treating substance misuse. We have the privilege of getting to know our patients well. How can you treat addiction in a vacuum?”

The next up was Sharon, 61, who brought along a toddler grandchild. Both Sharon and her daughter, the child’s mother, take Suboxone, a medication that can ease opioid craving.

“Sharon has been clean for years,” Anyikwa began.

Vigilant about language and stigma, Wlasiuk interrupted her. “Clean” is eschewed by many in the field, because it implies that those in the throes of addiction are, by extension, “dirty.”