Most ‘Bridgegate’ Convictions Upheld in Case Against Two Ex-Christie Allies 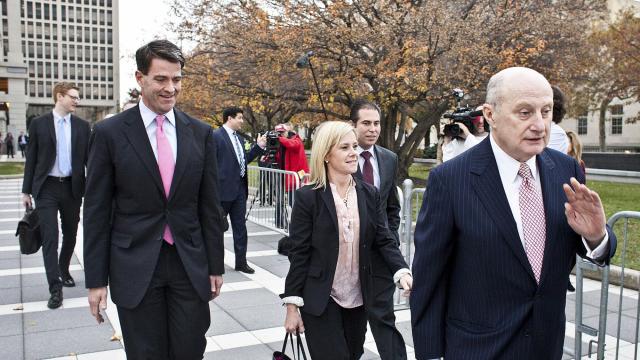 A federal appeals court Tuesday upheld most of the criminal convictions against two associates of former Gov. Chris Christie of New Jersey in the 2013 scandal over George Washington Bridge lane closings, one of the more bizarre events in the state’s political history.

But in a partial victory for the defense, the court cleared the two associates, Bill Baroni and Bridget Anne Kelly, of two of the seven counts they had been found guilty of in 2016. The decision sends their case back to the lower court in Newark and opens the chance that their prison sentences could be lessened.

Kelly, the former deputy chief of staff for New Jersey’s Office of Intergovernmental Affairs, was sentenced to 18 months in prison for her role in “Bridgegate,” as the incident came to be known. Baroni, the former deputy executive director of the Port Authority of New York and New Jersey, was sentenced to two years in prison. Both have been out on bail as their appeals continued.

Michael Critchley, a lawyer for Kelly, said in a statement that while her legal team was pleased some of the charges had been rejected, they were disappointed that all of them had not and “intend to petition the United States Supreme Court to review this case.”

Though the former governor was never charged, the scandal became a stain on the record of Christie, who saw his popularity and presidential ambitions plummet once the brazenness of the scheme to create traffic jams for political ends came to light in court testimony.

A jury in Newark found that Kelly and Baroni had illegally used public resources to close lanes of the George Washington Bridge with the intention of causing epic gridlock in Fort Lee during the first days of the school year. Their apparent motive was to punish Mayor Mark J. Sokolich of Fort Lee, a Democrat, for failing to support Christie’s re-election campaign.

The ruling of the U.S. Court of Appeals for the 3rd Circuit on Tuesday affirmed the facts of the case. “Under the guise of conducting a traffic study,” the three-judge panel ruled, “Baroni and Kelly, among others, conspired to limit Fort Lee motorists’ access to the George Washington Bridge — the world’s busiest bridge — over four days in early September 2013.”

That plan was put into motion by Kelly’s now-infamous email to David Wildstein, Baroni’s top deputy at the Port Authority, who pleaded guilty for his role in the scandal in 2015: “Time for some traffic problems in Fort Lee.”

The appeals court upheld the convictions on counts related to wire fraud and conspiracy to misuse property of an organization receiving federal benefits, namely the Port Authority. But the judges found that the lower court had overreached in ruling that Baroni and Kelly were guilty of a conspiracy against the civil rights of New Jersey residents, because federal law does not clearly establish a right to interstate travel.

The U.S. attorney’s office in New Jersey said in a statement that it was “reviewing the opinion and is grateful for the court’s consideration of all of the issues raised in the appeal.”

Legal experts said Tuesday that Judge Susan D. Wigenton, the federal court judge in Newark who had handled the sentencing, could reduce the punishment once the case was returned to her. But they also noted that prison time was still likely because the dismissed charges were among the lighter ones.

“I think they are going to prison, unless the Supreme Court takes the case,” said Carl Tobias, a law professor at the University of Richmond. He added that the chance that the Supreme Court would agree to hear the case was a “long shot.”