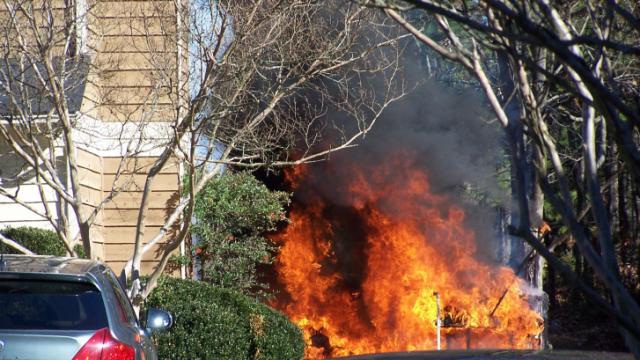 Morrisville, N.C. — Residents of a Morrisville apartment community became the third group to suffer from a Christmas Day fire when flames spread from the parking lot at 4032 Rambling Hills Drive to the building.

Earlier in the day, four adults lost their home in Smithfield and a Wilson McDonald's burned down. No one was injured in any of the fires and investigators were looking to the causes.

Firefighters from Morrisville, Apex and Cary responded to Treybrooke at the Park just after noon.

A resident said he put a box of ashes outside that he thought was out, and that sparked the fire. The resident did not want to give his name. He said his family's apartment was damaged but the Christmas presents for his three children were salvaged.

Two units were damaged in the fire, according to the Triangle Red Cross, whose volunteers were helping those residents.

Heavy smoke from the fire forced authorities to divert traffic in the area – west of N.C. Highway 54 and south of McCrimmon Parkway – for about an hour.