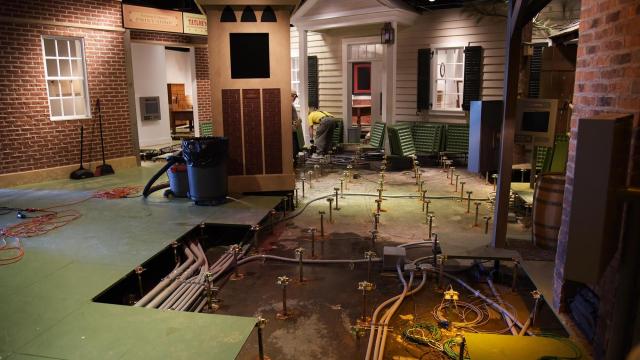 New Bern, N.C. — More than a year after Hurricane Florence badly battered Tryon Palace, the historic site celebrated the grand reopening of its popular Pepsi Portal to History this month.

The Pepsi Portal, also known as the Pepsi Family Center, is a family favorite with lots of hands-on activities and big touchscreens. It's designed to transport visitors to 1835 New Bern with play and technological displays.

During Florence in September 2018, however, the space experienced water intrusion that caused extensive electrical damage to the technologies and equipment in the gallery.

According to a press release, rain waters flooded the subfloor, destroying the wiring that was beneath the floor. This wiring was essential to the operation of the many computers that run the exhibit, leaving the entire exhibit inoperable, a press release says. The reopening is made possible through the efforts of contractors and staff, and the support of the Tryon Palace Foundation.

Other parts of the museum, including the Governor's Palace, Kitchen Office, historic grounds and gardens were able to open soon after the hurricane hit.

Tryon Palace is at 529 S. Front Street, New Bern, about two hours from Raleigh. It's a great day trip from the Triangle with lots of opportunities for learning and some fun.

Tryon Palace is the home of the Governor's Palace, North Carolina's first colonial and first state capitol, and includes historic buildings, gardens, and the North Carolina History Center, including the Pepsi Portal.