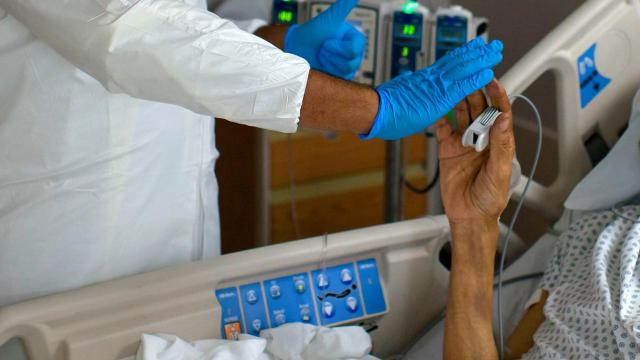 CNN — Florida on Saturday became the US state with the second-highest official coronavirus case count, passing New York, once the country's epicenter early in the pandemic.

California, with the most official cases (more than 440,000) and largest population, surpassed New York in case count a few days ago.

The states with the most recorded cases now align more closely with population rank. Florida is the country's third-most populous, and New York is fourth.

Florida has reported 414,511 cases since the pandemic's start, above New York's 411,200, according to state health agencies.

In the past few weeks, infection rates have been rising, especially in parts of the South and West, and Covid-19 hospitalizations nationwide have neared levels not seen since April. This has moved many states and cities to roll back reopenings, add mask mandates, and wrestle with how or whether to open schools for in-person classes.

Birx compared those states' situations to New York's outbreak in the spring, adding: "It's very serious and it's very real."

Texas, the state with the second-highest population, has the fourth-highest official case count at more than 380,000, according to Johns Hopkins University.

More than a third of coronavirus patients feel symptoms for weeks, CDC says

Coronavirus symptoms can stick around for weeks, even in otherwise healthy people who don't have a severe case of the virus, the US Centers for Disease Control and Prevention said in a grim new analysis.

The CDC surveyed 292 people who tested positive for the virus, and 35% said they still weren't back to their usual good health even two or three weeks after testing positive.

While older people were more likely to feel prolonged symptoms, even young adults without underlying conditions reported feeling unwell for a long period of time, the CDC said.

The new understanding into how the virus affects patients comes as more than 4.1 million cases of coronavirus cases and more than 145,700 deaths have been reported in the US, according to data from Johns Hopkins University.

Health experts have stressed the importance of testing to mitigate the spread of the coronavirus but have also said that people who do not show symptoms can spread of the virus.

On Friday, the US Food and Drug Administration announced an emergency use authorization for the first coronavirus diagnostic test specifically backed to catch cases among asymptomatic people and those who have no reason to suspect they have the disease.

The test from LabCorp amplifies genetic matter from the virus and has been proven to detect it in asymptomatic people, the FDA said. It can be used on anyone -- those with symptoms or without.

This frees doctors to confidently prescribe tests to more people, and not just those who are showing symptoms or believed to have been exposed, the FDA said.

The authorization also allows LabCorp to perform pooled testing -- of up to five people's samples at a time -- a process that health experts say could save testing resources and allow easier, broad screening of a community.

"FDA's authorization ... is a step toward the type of broad screening that may help enable the reopening of schools and workplaces," FDA Commissioner Dr. Stephen Hahn said in a statement Friday.

Vaccine could help, but is a long way off

For those hoping to reopen the US after the coronavirus pandemic, vaccines have been a beacon of hope.

Dr. Anthony Fauci, director of the National Institute of Allergy and Infectious Diseases, said that even if a vaccine candidate is successful by year's end, it would be several months -- well into 2021 -- before vaccination is widespread.

"I think as we get into 2021, several months in, that you would have (a) vaccine that would be widely available to people in the United States," Fauci told the Washington Post's Bob Costa during a Post Live event on Friday.

Fauci noted that some companies have said they could have a vaccine available before the end of the year.

"I'm a little skeptical about that, but, you know, anything is possible," he told the Post.

Months into the US coronavirus pandemic, states across the nation are still setting new records for infections and deaths.

Oregon, which has mandated face coverings both indoors and outdoors, recorded nine new Covid-19 deaths Friday, its highest number since the outbreak began, according to the state's health department.

California also reported its highest number of deaths from coronavirus on Friday, with 159 in a single day.

The Georgia Department of Public Health reported 4,813 new cases of Covid-19 on Friday -- the highest number of new cases reported in a 24-hour period by the state since the pandemic began.

As cases rise, many local leaders are enforcing measures to protect against the virus.

"We have over 1,600 new cases today. And that number is simply not sustainable. It pushes us towards almost 6,000 new cases in the last four days alone," the governor said at a news conference. "We have to do things a little bit differently. We have to be willing to make sacrifices as a state and as a people."

Fauci supports CDC's push to send kids back to school

The CDC released guidance Thursday pushing hard for schools to reopen, and Fauci called them "a sound set of guidelines."

"I think the CDC has put some good guidance down. I just took a quick look at them before I started in on the program, which was sent to me by my colleagues at the CDC. So I think it's a sound set of guidelines," Fauci told Costa during Friday's Post Live interview.

The CDC's guidance had a caveat: That if a community had substantial, uncontrolled virus transmission, schools and health officials should carefully consider closing schools or keeping them closed.

The guidance didn't firmly define the threshold. But on Friday, CDC Director Robert Redfield said counties with positivity rates of higher than 5% would be places that might consider keeping schools closed.

"But a majority of the nation right now actually has positivity rates that are less than 5%," Redfield said during a phone call with reporters. He said he didn't immediately know precisely how much of the country was under the threshold.

"There's still a lot to learn about what the prevalence and incidence of infection is in children," Fauci said.

Fauci added the National Institutes of Health has a study underway that is looking at 2,000 families to find, among other things, how frequently children get infected and if they transmit it to adults. It's expected to produce results by December, he said.

"Even though we have some information about that, we still need more," Fauci said.