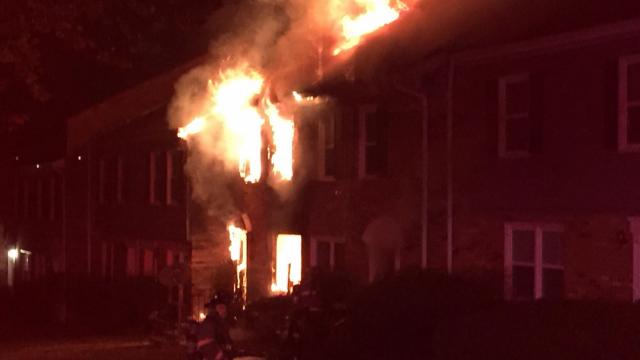 Durham, N.C. — More than a dozen people were displaced from their homes early Sunday morning after a fire in Durham.

Authorities said the fire happened around 3 a.m. at a group of townhomes located at 200 Seven Oaks Road. The Red Cross' disaster relief team was on scene to help the displaced families.

The first firefighters who arrived saw flames on both floors.

Sarah Glass and her husband were asleep when they awoke to a neighbor banging on their door.

"They were knocking really hard. We didn't know what was wrong. We looked out the window and he kept knocking and said 'hey, do you know the people who live here? You need to get them out. There's a fire. There's a fire right there,'" Glass said.

Glass and her husband got out.

"This whole unit was just up in flames completely," she said.

Other tenants also evacuated and watched anxiously as the flames roared.

"There were several women here with their babies and their children, some people with their pets locked in their cars. It was pretty scary," Glass said.

There were no injuries, but Durham fire officials said adjacent apartments had smoke and water damage.

The fire started from unattended cooking.