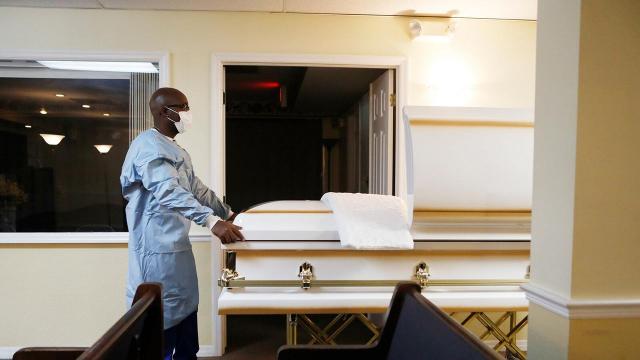 CNN — Looking back to the early days of the coronavirus pandemic, the White House coronavirus task force coordinator said Monday she wished the United States had gone into a stricter lockdown.

"I wish that when we went into lockdown (in March), we looked like Italy," Dr. Deborah Birx said Monday. "When Italy locked down, I mean, people weren't allowed out of their houses (without a pass). Americans don't react well to that kind of prohibition."

In Italy as the virus spread, residents were told to stay home and only leave for essential activities. Authorities would stop people and check to make sure they had documents that said where and why they were traveling.

In a roundtable discussion hosted by Arkansas Gov. Asa Hutchinson, Birx said she has learned what Americans are willing to do to combat the virus, and that officials must meet people where they are.

Birx cited the strategy Arizona has used to reduce the rising number of cases. People were still able to go to malls and restaurants at reduced capacity, but gyms and bars were closed, mask mandates were implemented, and gatherings of more than 10 people were prohibited.

"People were interacting, people were out, but people, by just not doing those careful things, were able to drop the cases significantly, probably by more than 80%," Birx said.

That kind of behavioral change is something every American can do, she said.

"Tens of thousands of lives can be saved if we wear masks, and we don't have parties in our backyards ... taking those masks off," Birx said.

"This was done at the time to make sure that we had enough hospital capacity and supplies, so that we didn't end up like Italy, where there were people dying on gurneys in waiting rooms," Kushner told CNN's Wolf Blitzer.

He complimented the President on the administration's response to a ventilator shortage, repeating the White House line that no American who needed a ventilator didn't get one.

"So, I think we have done much better than Italy with regards to how we handled this initially," he said.

Kushner said the United States is in the middle phase of the pandemic and the administration is using what it has learned to protect the most vulnerable people. He said they were rushing resources to nursing homes.

The novel coronavirus has infected more than 5.4 million Americans and killed more than 170,000, according to data from Johns Hopkins University.

Virus is No. 3 killer in the US

The virus, which didn't even exist a year ago, is now killing more Americans than Alzheimer's disease, accidents and diabetes.

Over the past three weeks, the US has averaged more than 1,000 Covid-19 deaths per day.

"Covid is now the No. 3 cause of death in the US -- ahead of accidents, injuries, lung disease, diabetes, Alzheimer's, and many, many other causes," said Dr. Thomas Frieden, a former director of the Centers for Disease Control and Prevention.

Heart disease and cancer are the leading causes of death in the US, according to the CDC.

The rate of deaths from Covid-19 is also much greater in the US than in many other countries, Frieden said.

"Last week, Americans were eight times more likely to get killed by Covid than were Europeans," he said.

In other words, Covid-19 is still spreading rampantly, but there's less testing to find and isolate cases.

The number of tests performed each day in the US dropped by an average of 68,000 compared to the daily rate in late July, according to data from the Covid Tracking Project.

Yet test positivity rates -- the percentage of tests that are positive -- are still higher than the recommended 5% in more than 30 states, according to data from Johns Hopkins University.

"The testing situation is not good in the United States. What we're not picking up is people who are contagious," said Dr. William Haseltine, chairman and president of Access Health International.

"We're probably missing 8 out of 10 people who are contagious. And any decrease in testing is worrisome because we're not already doing well. And if you don't pick people out of a crowd who are contagious, then the epidemic spreads. ... This epidemic is still spreading widely."

Why are some states testing less?

Medical experts say there could be several reasons.

"One of the reasons that testing is decreasing is that supplies aren't being shipped to places that can test. I think it's part of a strategy not to count how many people are infected," Haseltine said.

Another reason is that people may be less motivated to get tested, knowing it can take several days or longer to get results. And major delays can make some tests "borderline useless."

CNN medical analyst Dr. Kent Sepkowitz said he's worried some states may be taking cues from President Donald Trump, who said "when you do more testing, you find more cases," which might make the United States "look bad."

Sepkowitz, an infection control expert at Memorial Sloan Kettering Cancer Center in New York, noted that several states that have touted decreased case counts also had some of the highest test positivity rates -- an indicator that the virus is spreading.

"So even as the rates are worsening, many states have decided to reduce their efforts to find cases," he wrote. "As a result, by looking less, they are finding fewer cases and sure enough, the case numbers are going down."

And the number of patients hospitalized with coronavirus has declined by nearly 40% since peaking July 22, he added. The number of ICU patients is down 30% since July 18.

DeSantis said he thinks the downward trends across the state are durable. "We're going to continue to work hard to be able to see these good trends."

One of the measures the state took to blunt the number of cases was closing bars in late June.

Halsey Beshears, Florida's top business regulator, is reviewing feedback and ideas from his meetings with bar and brewery owners from across the state, but no timeline for the reopening of bars has been set, according to Karen Smith, a spokeswoman for the Florida Department of Business and Professional Regulation.

"While no time frame for reopening is certain, Secretary Beshears understands the urgency advocated by business owners in these recent meetings," Smith said.

While medical experts hope a vaccine will be publicly available in 2021, researchers have encountered a problem: not enough Black and Latino volunteers have signed up for clinical trials.

Of the 350,000 people who've registered online, 10% are Black or Latino, according to Dr. Jim Kublin, executive director of operations for the Covid-19 Prevention Network.

That's not nearly enough, as trial participants are supposed to reflect the population that's affected. Research shows more than half of US Covid-19 cases have been among Black and Latino people.

Much of the distrust stems from a history of medical atrocities against minorities. From 1932 to 1972, Black men were subjects in the Tuskegee syphilis study without their knowledge or consent and were not offered penicillin to treat their disease.

In the 1800s, Dr. J. Marion Sims experimented on slaves and performed surgeries without their consent and without anesthesia.

And from the 1940s until the 1970s, researchers in several studies exposed hundreds of subjects -- mostly Black people -- to dangerous amounts of radiation.

So far, phases 1 and 2 have shown the vaccine to be safe. Some volunteers experienced fever and muscle aches, but they felt better after a day or two.

There is some good news: A new saliva test could give Americans a quick way of learning if they have Covid-19 -- and if they need to isolate to help prevent the spread.

Researchers from the Yale School of Public Health created the SalivaDirect test, which received emergency use authorization from the Food and Drug Administration on Saturday.

"If cheap alternatives like SalivaDirect can be implemented across the country, we may finally get a handle on this pandemic, even before a vaccine," said Nathan Grubaugh, a Yale assistant professor of epidemiology.

Unlike some other tests that require specialized supplies, the SalivaDirect test doesn't require a specific swab or collection device. It can also be used with reagents from multiple vendors.

"We simplified the test so that it only costs a couple of dollars for reagents, and we expect that labs will only charge about $10 per sample," Grubaugh said.

Researchers said the new test can produce results in less than three hours, and the accuracy is on par with results from traditional nasal swabbing. They said SalivaDirect tests could become publicly available in the coming weeks.