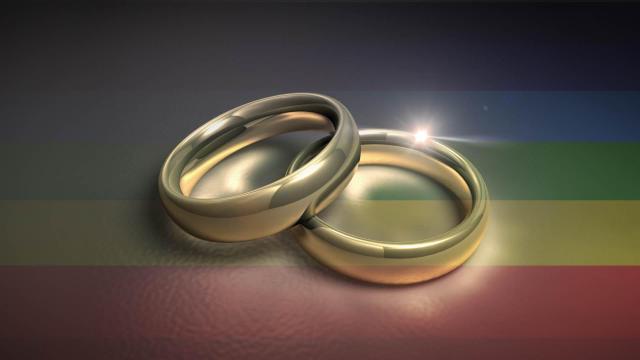 Asheville, N.C. — National groups representing Baptist and Jewish congregations and the priests of the All Souls Episcopal Cathedral in Asheville added their voices Tuesday to a federal lawsuit challenging North Carolina's constitutional ban on gay marriage. They join the United Church of Christ, which initiated General Synod of the United Church of Christ vs. Cooper in April.

The lawsuit alleges that "unjust laws" like North Carolina's amendment defining marriage as between one man and one woman impinge upon religious freedoms because they preclude clergy from performing same-sex marriage ceremonies in their congregations.

“Depriving rabbis of the freedom to conduct same-sex marriage ceremonies in North Carolina stigmatizes our religious beliefs and relegates many of our congregants and community members to second-class status," said Rabbi Steven Fox, chief executive of the Central Conference of American Rabbis, in a statement.

"A religious majority is passing and/or sustaining marriage laws that suit their religious beliefs, thus infringing on the free and equal access to marriage in the public square for those in the religious minority on this issue,” added Michael Castle, president of the Alliance of Baptists.

When the suit was filed, Tami Fitzgerald, executive director of NC Values Coalition, which helped secure the constitutional amendment two years ago, said North Carolina residents overwhlemingly approved the ban on same-sex marriage, and federal judges shouldn't ignore the will of the people.

"It’s both ironic and sad that an entire religious denomination and its clergy who purport holding to Christian teachings on marriage would look to the courts to justify their errant beliefs," Fitzgerald said in a statement. "These individuals are simply revisionists that distort the teaching of scripture to justify sexual revolution, not marital sanctity."

Laura Riddick, Wake County’s register of deeds, said her office was wrongly targeted by the plaintiffs.

“It’s ridiculous for any registry to be sued over same-gender marriage, which is a matter of state law, not county policy,” she said.

“Only the legislature or the courts can change the law. Our job as county administrators is to apply the law as it is – just as we will apply the law if it changes. Suing us misleads the public, wastes county taxpayer dollars, and creates unnecessary conflict. I don’t see how that is in any respect holy.”

This isn't the first legal challenge to North Carolina's amendment.

The American Civil Liberties Union has also launched a legal assault on the state's ban on recognizing same-sex marriage, urging a federal judge to quickly negate it to help children and gay couples suffering from urgent health problems. The civil rights group said it was seeking to speed up a decision in a lawsuit filed in 2012 by citing the urgent health needs of a child who suffers from cerebral palsy who was adopted by one of the lesbian couples involved in the case.

The ACLU also filed a new lawsuit on behalf of three other lesbian couples struggling with health conditions made more difficult because they lack legal recognition of their marriages performed in other states, said ACLU staff attorney Elizabeth Gill.

The ACLU and the same-sex couples they represent argue a judge should act quickly to suspend North Carolina's marriage ban because they are suffering immediate and irreparable harm.