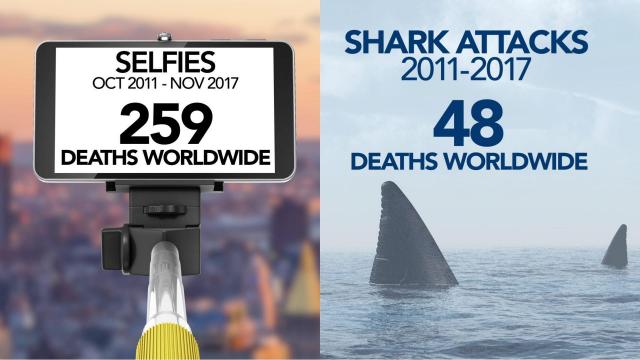 Three people have already been bitten by sharks in North Carolina in 2019. While it may seem like the ocean is getting more dangerous, shark experts think otherwise.

Shark attacks aren't on the rise. But here's how to stay safe this summer.

According to NBC News, despite a recent handful of shark attacks and sightings in the Atlantic Ocean, experts say 2019 is shaping up to be an average year in terms of encounters. Globally, the average number of shark attacks is trending downward.

In fact, experts say people are more likely to die taking a selfie than being bitten by a shark. Researchers found selfies contributed to more than 250 deaths worldwide between October 2011 and November 2017.

Drowning is the leading cause of selfie deaths -- usually because people are washed away by waves on beaches or fall out of a boat while posing, experts say. As for deadly shark attacks, there were 48 reported worldwide between 2011 and 2017.

A total of three people in North Carolina were bitten by sharks in June:

An 8-year-old boy was bitten while swimming in Bald Head Island.

Paige Winter, a teenager from New Bern, lost her leg and several fingers when she was attacked while swimming in Fort Macon.

A shark bit Austin Reed, 19 on his foot when he was surfing at Ocean Isle Beach.