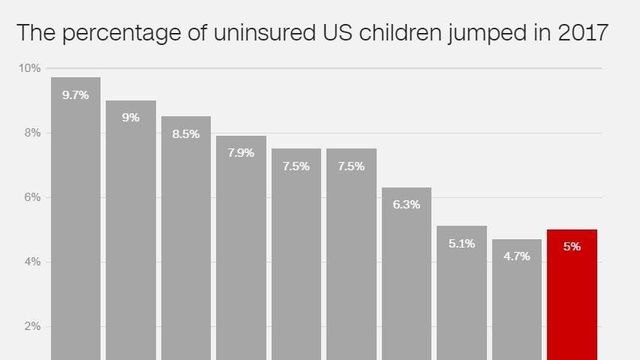 (CNN) — For the first time in nearly a decade, the number of uninsured children in America has grown.

The reversal is unprecedented, particularly given a strong economy in which more people are landing jobs and gaining access to employer health coverage. It also comes at a time when the nation's overall uninsured rate remained flat.

Roughly 276,000 more children were uninsured in 2017 than the year before, bringing the total to more than 3.9 million, according to a report released Thursday by Georgetown University's Center for Children and Families. Some 5% of those 18 and under had no health insurance, up from 4.7% a year earlier.

"With an improving economy and a very low unemployment rate, the fact that our nation is going backwards on children's health coverage is very troubling," said Joan Alker, the center's executive director. "Without serious efforts to get back on track, the decline in coverage is likely to continue in 2018 and may in fact get worse for America's children."

What's behind the increase in the uninsured isn't clear, but Alker attributes it to the Trump administration and Congress' attempts to dismantle the Affordable Care Act and shrink Medicaid. Also, it took months for Congress to approve long-term funding for the Children's Health Insurance Program, forcing several states to tell parents they might have to shutter their programs.

"For these families, 2017 was a year of constant news about the President and Congress wanting to take health coverage away," said Alker.

The expansion of Medicaid and opening of the Obamacare exchanges in 2014 -- as well as the corresponding attention to health insurance -- spurred even greater improvements in kids' coverage. The children's uninsured rate fell to 4.7% in 2016, from 7.5% in 2013.

Another factor in the decline of covered children may be the Trump administration's actions toward immigrants, including a proposal to reject green card or visa applicants deemed likely to need Medicaid or other government assistance in the future. Some undocumented parents with children who are American citizens may not be signing them up for public coverage because they fear interacting with the government, Alker said.

The impact of the robust economy can be seen in the report, which is based on census data. The share of children with employer-sponsored coverage increased in 2017 from the year before. However, the share covered by Medicaid, CHIP or plans purchased directly from insurers, including on the Obamacare exchanges, dropped.

Notably, no state saw a significant decline in the number of uninsured kids in 2017, though the District of Columbia did experience a drop. Nine states -- led by South Dakota, Utah and Texas -- saw their children's uninsured rates increase. States that haven't expanded Medicaid, as well as those with larger shares of Hispanic and Native American children, saw greater jumps.

"The absence of significant progress across the country suggests that even states with the best intentions were unable to withstand strong national currents to protect children from losing health coverage," the report said.

Three-quarters of uninsured kids live in states that haven't expanded Medicaid, a provision of Obamacare that provided coverage to everyone with incomes up to 138% of the poverty level. Texas leads the nation with an uninsured rate of 10.7% -- more than one in five uninsured children in the US live there.

The decline in children's coverage comes even as the overall uninsured rate hasn't budged. The 2017 rate held steady at 8.8%, with 28.5 million people lacking health coverage. These figures were not statistically different than in 2016.