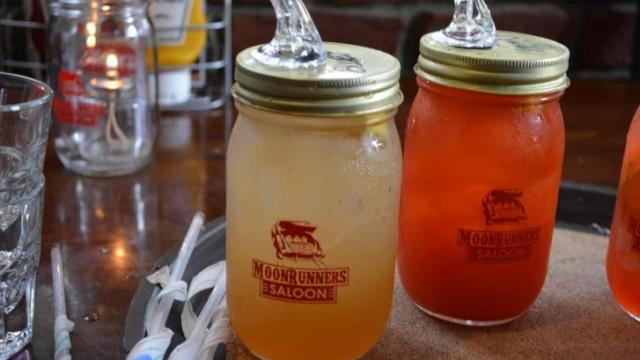 That whirlwind experience will air Sunday night on Spike TV when Moonrunners' episode of the popular bar renovation show airs for the first time.

It will also be the first time the staff and owners will be seeing the show.

On the popular reality show, Taffer is known for coming into the door and immediately zeroing in on what needs to change about a failing bar.

"He has 30 years experience that he needs to unload in 36 hours," Alexander said.

Although he might appear abrasive on TV, Alexander and others at the Garner bar found Taffer to be a nice guy, just passionate about helping the business succeed.

"You get that he genuinely cares," co-owner Charlie Alexander said.

Charlie Alexander said Taffer identified the food costs were high and needed to be changed. He also gave the place a new concept – Moonrunners Saloon, a prohibition-era themed restaurant and bar with great food and specialty drinks.

Also expect Taffer to focus on the family dynamic of the restaurant, which is run by and also co-owned by Helen Alexander's son Guy Wavra.

The family is originally from New York and the Alexanders said Taffer immediately identified them as a Northern family trying to make their way in the restaurant industry in the South.

Taffer brought in a few experts to help him transform the struggling bar.

The restaurant menu got revamped with new additions by celebrity chef Brian Duffy. The bar kept about 70 percent of the menu, but added new favorite including fried catfish bites and collards. If you go, definitely try the fried pickles and the fall off the bone ribs. The customers have loved the collards so much that they are asking for them to be sold by the quart or pint around the holidays.

In addition to the food, mixologist Russell Davis worked with the bartenders and staff to create a few new cocktails – one of which contained moonshine.

Moonrunners officially opened its doors at the end of March, but the evolution of Moonrunners didn't end when the cameras stopped.

"Why not take it to a whole new level?" Wavra said.

Wavra worked with the staff to develop an entire menu of moonshine cocktails. You can get them as shots, in tasting flights complete with tiny mason jars or in full size mason jars. The bar is also making their own moonshine – legally.  If you go, try the Apple Pie moonshine. It smells and tastes just like Apple Pie.

"It's about having a cocktail you can enjoy," Wavra said.

The cocktail menu will also change seasonally, he said.

"Not happy to see it go because you put your heart and soul into something, but I was ready for a change," he said.

Helen Alexander missed it a little at first, but is really enjoying the evolution of the new concept – from finding the perfect small mason jars for flights or decorating the bar with jugs brought in by customers.

Now that their "Bar Rescue" episode is set to air, Moonrunners is hoping more people from across the Triangle will take a trip to the saloon.